Stop what you’re doing and make this Taco Bell Copycat Vegan Crunchwrap Supreme. I assume that you might be planning to do so (since you’re reading this blog post), but really, it’s essential that you make this recipe.

In the 2 weeks since I first tried this recipe, I have made it 5 times. I think that is a record for me since I am always testing new recipes for the blog (and now my second cookbook!).

The main reason I have made it so often is that Max is *obsessed* with these crunchwraps. I’ve never seen him obsess about food in this way before. I guess I should be flattered, but it is also mildly annoying when he comes into the kitchen every day and asks “Hey, what are you making? Are you making me a crunchwrap?”

Table of Contents
1. What is a Crunchwrap Supreme?
2. How to Veganize This Recipe
3. Ingredients in Vegan Taco Meat
4. How to make Vegan Taco Meat
5. Assembly Instructions

I actually made them for the first time while filming a Youtube video, so I hope you check out the video. It’s full of tips on what worked (and didn’t work) and lots of laughs. 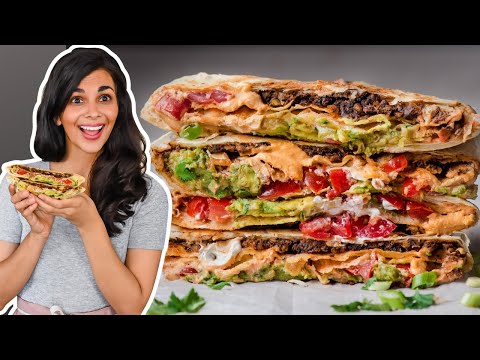 I made a VEGAN Crunchwrap Supreme better than Taco Bell

What is a Crunchwrap Supreme?

A crunchwrap supreme is one of Taco Bell’s most popular dishes.

In short, it’s a bunch of taco fillings + a crispy tostada shell wrapped up in a giant flour tortilla, then griddled until golden and crispy on the outside and soft and gooey yet crunchy on the inside thanks to the tostada.

It’s been described as a “gift from the fast food gods” and the “best thing on Taco Bell’s menu”, so I had to make a vegan version at home.

How to Veganize This Recipe

A traditional Taco Bell Crunchwrap Supreme is made with ground beef. And initially, I thought about just using a store-bought vegan meat substitute, such as soyrizo or Beyond Meat. But, I decided to develop my own homemade taco meat because (1) it felt like cheating to use a store-bought meat substitute in this recipe and (2) I wanted the challenge of making a taco meat recipe, since I’ve never made anything like it.

I’m just going to toot my own horn and say that I think this vegan taco meat is *fantastic.” It’s really rewarding to be able to make your own taco meat at home (more info on the actual recipe in the next section), but if you prefer to keep things quick, you can use store-bought vegan beef crumbles such as this or soyrizo.

This vegan queso tastes like a hybrid between queso sauce and nacho cheese sauce, and is the perfect cheeze for this recipe (and for quesadillas, tacos, and burritos).

Best of all, it’s so easy and quick to make. All you need to do is blend up a handful of ingredients in a blender!

Note: if you have my cookbook, The Vegan Instant Pot Cookbook, my Queso recipe would be fantastic in here too! 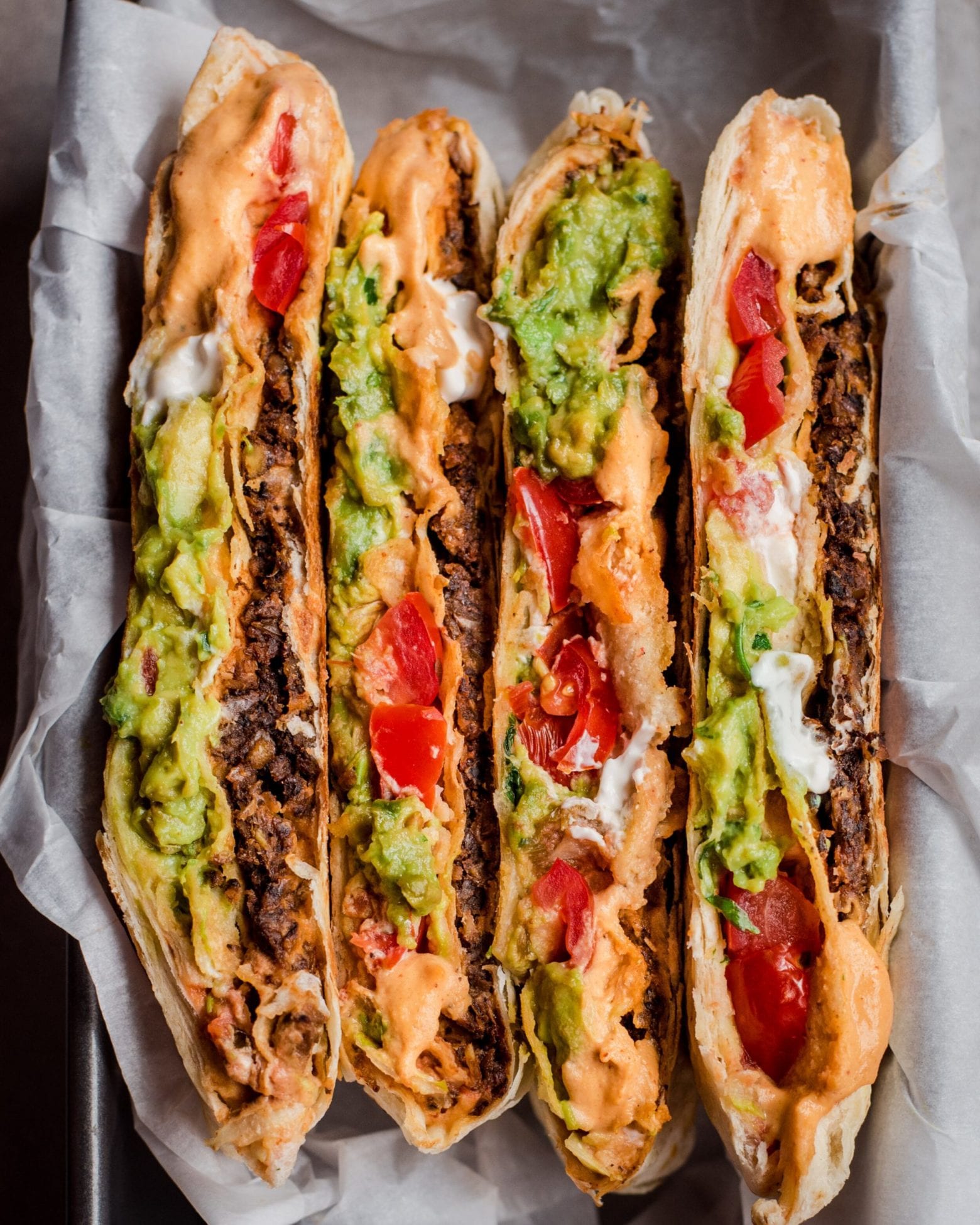 As I mention in the Youtube video, I think the best vegan sour cream is from Tofutti. It tastes *just like* traditional sour cream but even better.

The other ingredients are lemon juice, white vinegar, salt, garlic powder, and water.

My vegan sour cream recipe is delicious and works just as well in this recipe as the store-bought vegan one. But to be honest, when I make these crunchwraps for Max and I to just enjoy, I use the store-bought sour cream since it’s one less component for me to prepare :)

The rest of the fixings in a crunchwrap supreme (lettuce, tomatoes, salsa) are vegan so there’s no need to “veganize them.”

That said, my version includes three extras that are not part of Taco’ Bell’s classic crunchwrap supreme. First, guacamole, because guac makes everything better. I made a version of these without guacamole, and while it’s still very delicious, I do like it better with guac. Two, salsa. I’m kind of surprised Taco Bell doesn’t add salsa since it’s an easy and cheap addition, but you can really taste the salsa in this recipe so I love it. And three, cilantro, for a little fresh herbaceous flavor.

What makes the crunchwrap genius is the combination of a (1) a soft flour tortilla and (2) a crispy tostada shell. This is what makes it taste a hard taco shell wrapped in a quesadilla/burrito.

I make my own tostadas because I find store-bought tostadas to be quite bland (or perhaps, it was just the brand I bought). Luckily, it is *so easy and quick* to make your own tostada shells. All you need to do is brush some soft corn tortillas with oil and bake them in the oven for 10 minutes until nicely browned and crispy.

Note: if you don’t want to make your own tostadas and can’t find store-bought tostada shells, feel free to substitute with. a handful of tortilla chips.

The base for this ground meat is actually very healthy. It consists of lentils, mushrooms, onions, and walnuts.

The remaining ingredients help bring flavor to the taco meat. They include nutritional yeast (more umami), taco seasoning (a must in a Taco Bell recipe), ground flaxseed meal (helps to bind the ingredients together), smoked paprika (for a slight smoky taste, always helpful when trying to mimic meaty flavors), and salt/pepper.

There are two other flavoring ingredients that are optional. They’re not common ingredients so I kept them optional, but they significantly increase the “beefy” taste of this taco meat.

First, porcini mushroom powder. It adds so much savory goodness (hello, more umami!) in a concentrated form. I buy mine on Amazon, and use it whenever I want to punch up the volume in a savory dish (it’s also excellent in homemade vegetable broth). Here is another alternative mushroom powder that is sometimes sold at Whole Foods, and Trader Joe’s has one as well (though it’s not as potent as the one I used in this recipe).

Or, if you have dried mushrooms at home, you could also put those in a food processor or spice grinder and pulverize until they’re finely ground up.

I personally don’t need my taco meat to taste like beef (I never liked beef much, even before going vegan), but I wanted to develop a crunchwrap supreme recipe that tastes as close to the original Taco Bell one as possible. Just kidding. My version is WAY better than Taco Bell’s. It might just be in the Top 5 of the most delicious things I’ve ever eaten.

How to make Vegan Taco Meat

The cooked lentils will get mostly (but not fully) pureed in the food processor. Watch the video at the 03:07 mark to see the desired texture of the blended lentils.

Meanwhile, toast the walnuts to bring out their nuttiness and temper the bitterness. Then, add the walnuts to the food processor (first take out the lentils and them to a large bowl) and quickly blend until you have a fine crumb. Add the mushrooms and onions to the walnut crumbs and blend until very finely chopped up. Watch the video at the 04:00 mark to see the desired texture.

Then remove the walnut-mushroom-onion mixture from the food processor and add it to the large bowl with the pureed lentils. To that bowl, add the remaining taco meat ingredients and fold with your hands until you get a slightly sticky mixture that comes together.

Do not add the remaining ingredients to the food processor and just blend everything together. This will overwork the mixture and cause it to become too sticky. It is important to fold in these ingredients by hand.

First, assemble all of your components. This is the order in which I layered my components.

The ideal size of a flour tortilla for a crunchwrap is 12 inches. Unfortunately, I’ve never seen such large tortillas at grocery stores, only at restaurants. The largest size I’ve been able to buy are 10-inch tortillas like this. It’s large enough to fold the crunchwrap around in 6 folds, but the tortilla isn’t large enough to fully fold over the fillings in the center.

This dilemma requires a little McGuyvering, but luckily it’s simple. Take an extra flour tortilla and cut it in half, then cut each half in half, so you end up with four triangular wedges (see the fourth photo above). Use that triangular wedge to cover up the taco fillings in the center before folding over the main flour tortilla over the taco fillings.

If this sounds confusing, I recommend watching the Youtube video at the 14:39 mark.

Finally, heat up a skillet over medium heat with a small amount of oil and cook the crunchwrap supreme (seam side down). After it’s golden and crispy, flip and cook it on the other side. Voilà, that’s it!

PRO TIP: Exercise restraint and adding only a moderate amount of fillings to your wrap. An overstuffed crunchwrap might fall apart when you fry it.

I do recommend eating your Crunchwrap Supremes shortly after you make them because the longer they sit, the softer the tostada shell will get. It’s still tasty, but you miss out on the quintessential crunchiness that makes a crunchwrap supreme.

That’s all you need to know about this Vegan Crunchwrap Supreme! If you make it, please leave a comment below or on Youtube with your feedback! And of course, tag me with your remakes on Instagram!

*I recommend soaking the cashews overnight, if you can, instead of in boiling water for 1 hour, because it really softens them up. There isn’t much liquid in this recipe, so even when you’re using a fancy blender like a Vitamix, having really soft cashews will make it easier to blend. I also recommend refrigerating this sour cream before using, as it significantly improves its taste.
An easy but tasty guacamole recipe! This recipe makes quite a lot of guacamole, so feel free to halve the recipe depending on how many crunchwraps or nachos you’re making.
Prep Time: 10 mins
Total Time: 10 mins
Course: Condiment
Cuisine: Mexican
Diet Vegan
Serving size: 10 to 10