This Vegan Brown Butter Peach Cobbler post is sponsored by Country Crock® Plant Butter. All opinions and recipes are my own.

I am going to start things off by saying this is THE BEST SUMMER DESSERT EVER. I have made it three times in the last 8 days, which is absurd because I am moving in less than 3 weeks and I should really be using my spare time to pack and not bake.

But, that’s how good this Vegan Brown Butter Peach Cobbler is. A rich cobbler batter gets swirled with vegan brown butter, then topped with fresh summer peaches and juicy blueberries coated in a warming sugar-and-spice mixture. The result is a texture that is sticky and caramelized on top, yet fluffy and tender on the inside. It feels like part peach cobbler, part cake in the best way possible.

Texture, texture texture. This vegan peach cobbler has the best of texture worlds. The brown butter bubbles up in the oven, and transforms the cobbler batter into a sticky, caramelized cake with edges and bits that are almost crunchy. Meanwhile, the inside of the cake is fluffy, tender, and melts in your mouth.

Pure Decadence. This is the most decadent dessert you can imagine (hello, brown butter)! Imagine the most buttery, most indulgent cake ever. This is it! I promise no one will ever guess this peach cobbler is vegan, which means it’s the perfect dessert to bring to an event, whether it’s a potluck, barbecue, or any other socially distanced summer gathering.

Easy to make. While this recipe might sound complicated or challenging, it’s actually very easy and quick to prepare. Especially with the handy step-by-step photos and video instructions. No pastry dough required, the cobbler batter simply involves whisking together a few ingredients (flour, sugar, milk), and it’s 10 times easier than making pie! But just as tasty as pie, if not tastier.

Summer heaven. Peaches are at their peak right now, and this is such a fantastic way to enjoy them. Peaches get married with coconut sugar, cinnamon, ginger, cardamom, and fresh nutmeg for delightfully warm and rich flavors. 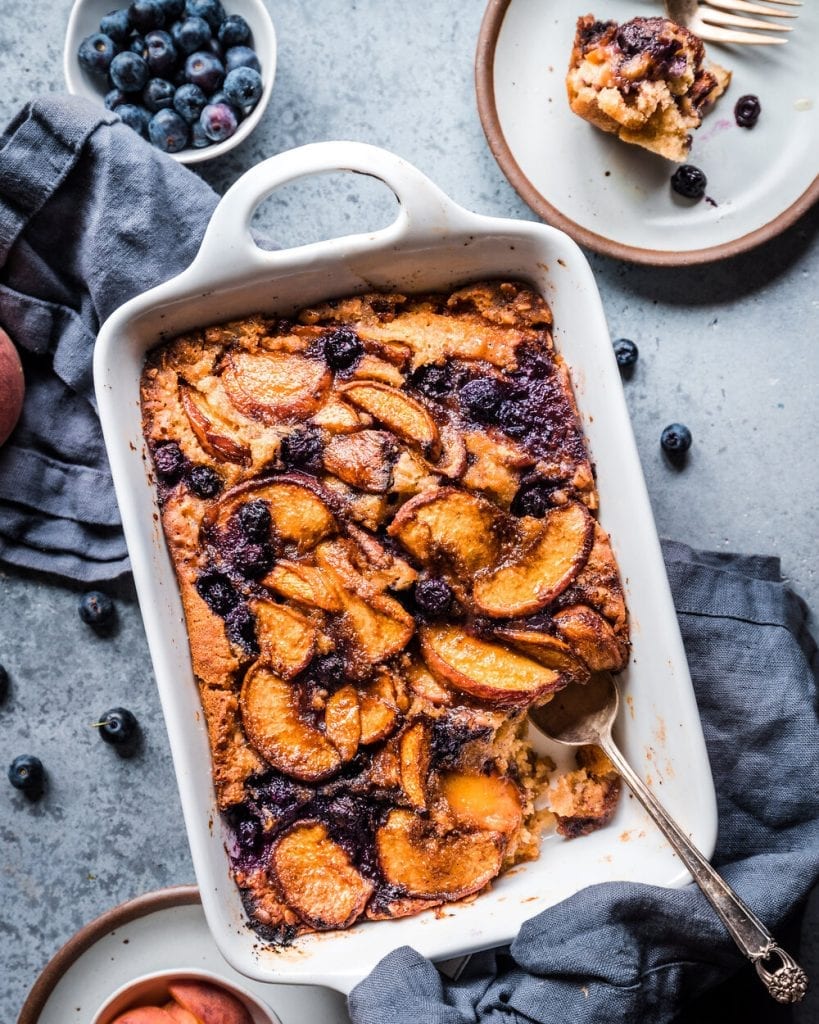 Until recently, I didn’t even know you could make vegan brown butter. Luckily, Country Crock Plant Butter works just like classic dairy butter, which means it also browns beautifully! I promise you (or your guests) will never taste or notice the difference!

Once browned, the Plant Butter becomes noticeably deeper, richer, and toastier in flavor, which makes the cobbler so incredibly delicious and packed with flavor. Plus, once you start browning the butter, an intoxicatingly nutty aroma will waft throughout your kitchen.

This is the perfect plant-based butter to use when you want to create an indulgent buttery dessert that tastes like the real thing but is 100% dairy-free.

This recipe calls for a generous amount of vegan butter (10 tablespoons, to be precise), but I already told you it was decadent! 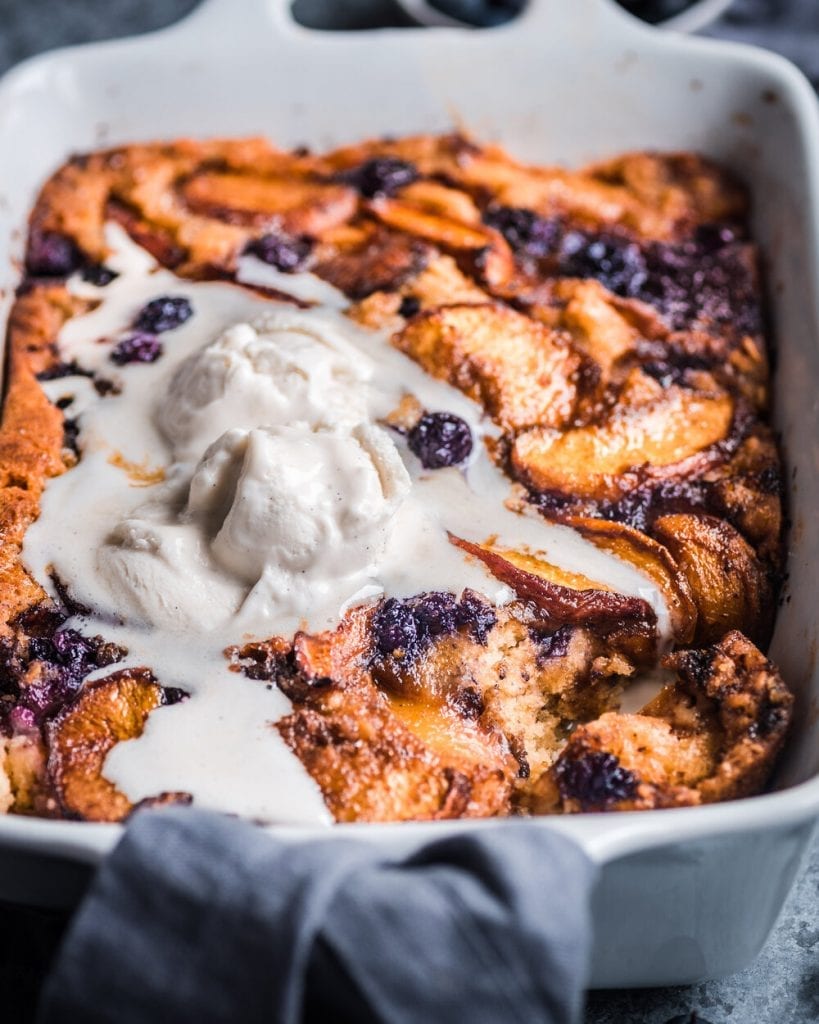 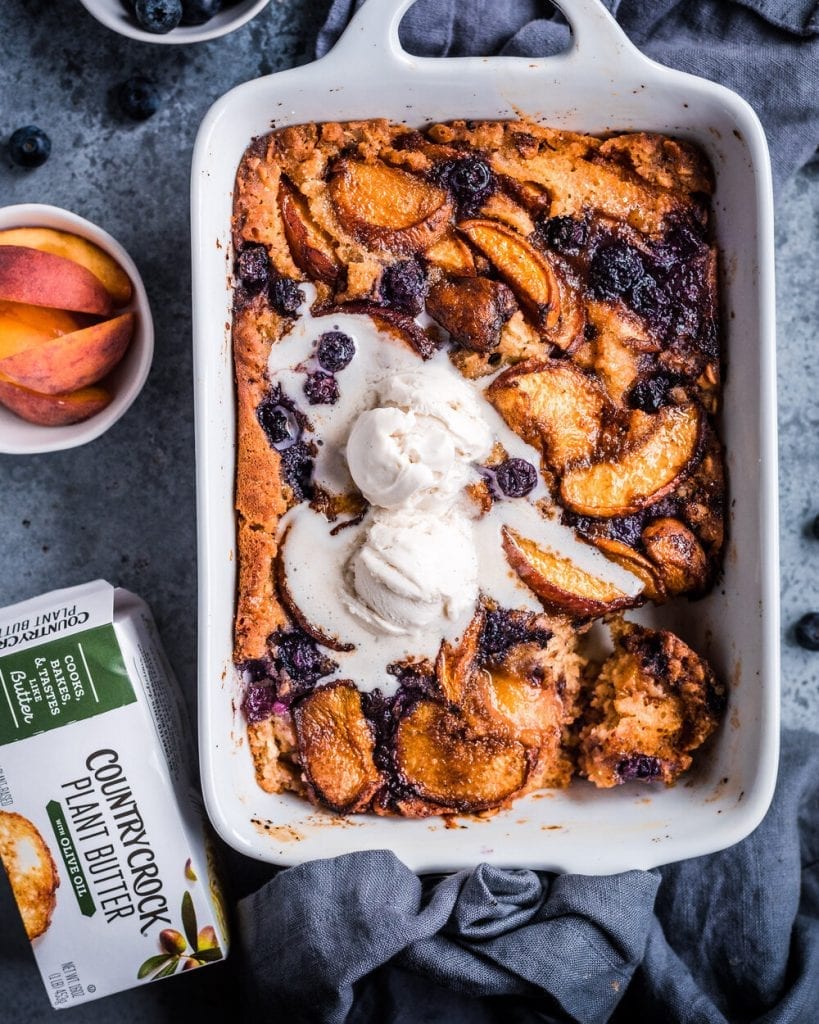 Peaches. This is a peach cobbler! You want to use ripe but slightly firm peaches so they don’t totally disintegrate during baking.

Blueberries. Technically this is a blueberry-peach cobbler, but if you don’t have blueberries, don’t let that detract you from making this. You could also substitute them with blackberries or raspberries.

Coconut Sugar and Spices. The peaches and blueberries macerate with coconut sugar, cinnamon, ginger, cardamom, and nutmeg. I like using coconut sugar (or brown sugar) instead of white sugar since it pairs beautifully with these warming spices. The cardamom is optional, but if you can, use freshly grated nutmeg. It makes a difference, I promise.

Plus, did you know that fresh nutmeg pods have a shelf life of 3-4 years? So you can use fresh nutmeg in this recipe and use the same bottle in your pumpkin pie for Thanksgiving 2023.

All-Purpose Flour. All-purpose-flour brings the structure to this cobbler. I have not tried making this recipe gluten-free (I don’t have gluten-free flour at home and put a moratorium on buying any new dry ingredients that aren’t essential, since we are moving shortly).

If you can tolerate gluten (i.e., perhaps you avoid it, but you’re not allergic to it), use the regular flour and don’t bother trying to experiment because this recipe is so good, as written. Plus, there’s already a ton of vegan butter in this, so no point in trying to “healthify” it lol.

Rolled Oats. Oats aren’t traditional in a cobbler, but I love the subtle texture they bring to this rustic cake/cobbler hybrid. 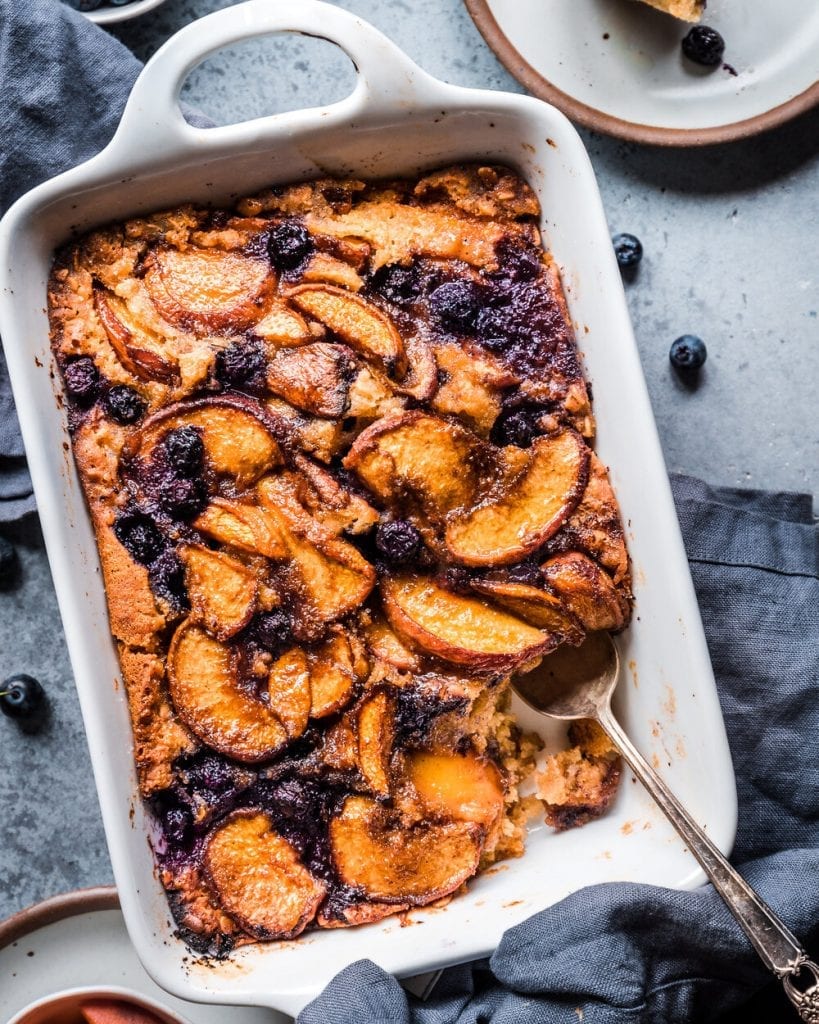 How to Make Brown Vegan Butter

Browning vegan butter is remarkably similar to browning regular butter! All you need is a skillet and vegan butter.

First, slice your vegan butter into even sized pieces. I sliced them into ~1 tablespoon pieces. Even-sized pieces means the butter will cook evenly.

Note: I used a cast iron skillet in the photos below, but in the successive times i’ve made this, I used a light colored skillet because it’s much easier to notice when the butter is browning when your skillet isn’t too dark.

Next, add your vegan butter pieces, and once they’re melted, stir the butter frequently. Frequent stirring is important for even browning and to prevent burning. Also, frequent stirring or swirling the pan allows you to see your browning progress. The butter will start to foam after several minutes, and then shortly afterwards, it will become this beautiful amber-golden brown color. You’ll also start to smell that toasty, nutty aroma.

The entire process took me 5-8 minutes, depending on the pan I used. Finally, as soon as the butter is browned, take it off the heat to stop it from overcooking. Then, transfer it to your baking dish.

How to Make this Vegan Brown Butter Peach Cobbler

Now, that you know how to brown vegan butter, let’s talk about how to assemble the rest of this peach cobbler. Before you brown the vegan butter, you’ll want to prepare the peach-blueberry filling.

Slice your peaches into 1/4 to 1/2 inch thick slices. Mix in some blueberries, and toss in the coconut sugar, cinnamon, ginger, cardamom, and nutmeg. Gently toss (don’t smash the peaches) and let the mixture macerate for 30 minutes. This softens the peaches but also helps the fruit absorb the flavors of the sugar and spices.

Then, make the cobbler batter. This part is remarkably easy! Just whisk together the flour, oats, sugar, salt, and baking powder. Then whisk in the oat milk and extracts and mix until thickened and well-combined.

Finally, gently spoon the peach-blueberry mixture on top of the brown butter cobbler mixture. In the photos below, I just randomly spooned the fruit on top. In the video, I neatly arranged the peach slices in a row.

Guess what? They both tasted delicious. I couldn’t tell the difference lol.

Bake the cobbler at 375°F/190°C for 45-50 minutes, turning the pan 180° halfway through to ensure even browning (most ovens are hotter in the back). The cobbler is done when it is bubbling around the edges and deeply golden brown on top. 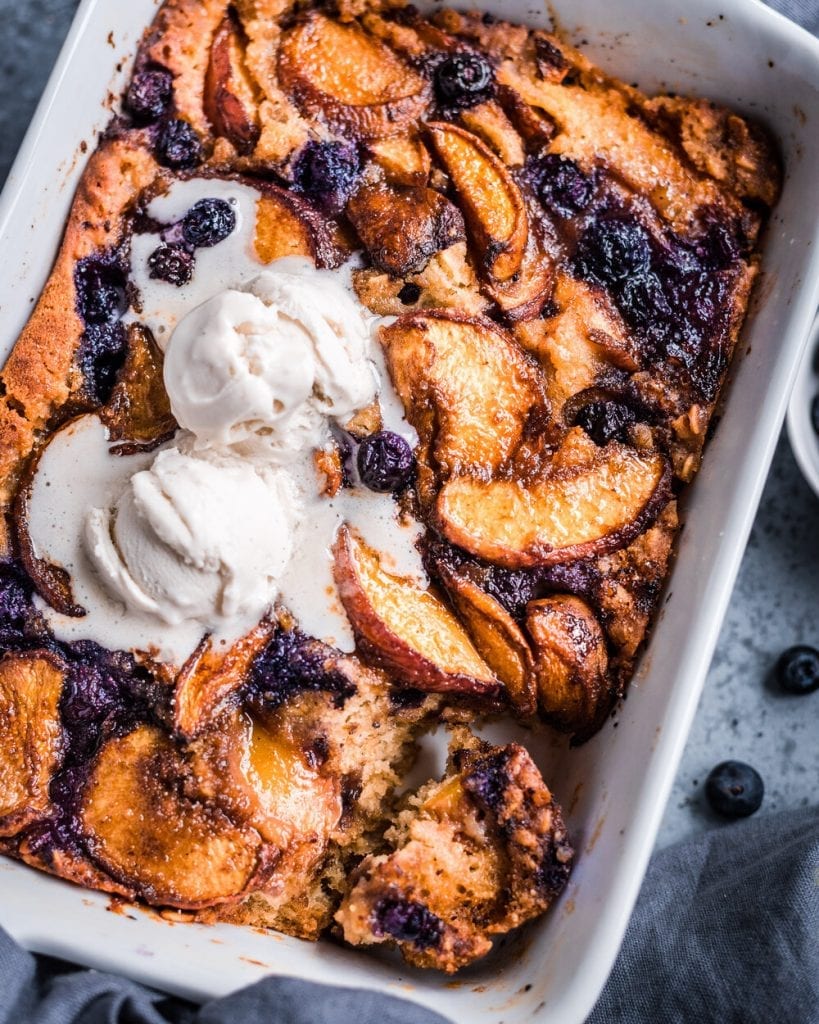 Adjust the sugar amount as needed. If your peaches are very sweet, you can slightly reduce the amount of sugar in the cobbler batter.

Adjust the salt, as needed. I use Country Crock Plant Butter, which has salt in it. If your vegan butter doesn’t have salt in it, slightly increase the amount of salt.

Using an oven thermometer is especially important in a recipe where browning is critical to the success of the recipe, as in this brown butter peach cobbler.

Luckily oven thermometers are inexpensive (the one I have is $7).

Assess your pan size. I use a 2 quart pan that’s roughly 11x7x2.5 inches, which is fairly deep for a pan that size. The batter filled up to nearly the top of this pan, so if your pan is slightly smaller or less deep, I recommend not overfilling it to the top (you can leave some of the batter + fruit filling aside and put it in a ramekin for a single-serving cobbler).

Note: some readers have made it with a 3 quart rectangular pans such as 13×9-inch pans, as well as large 12-inch cast iron skillets with good results. If your cast iron skillet is smaller (e.g., 8-10 inches), you’ll have leftover batter, but you can make a single serving cobbler in a ramekin! 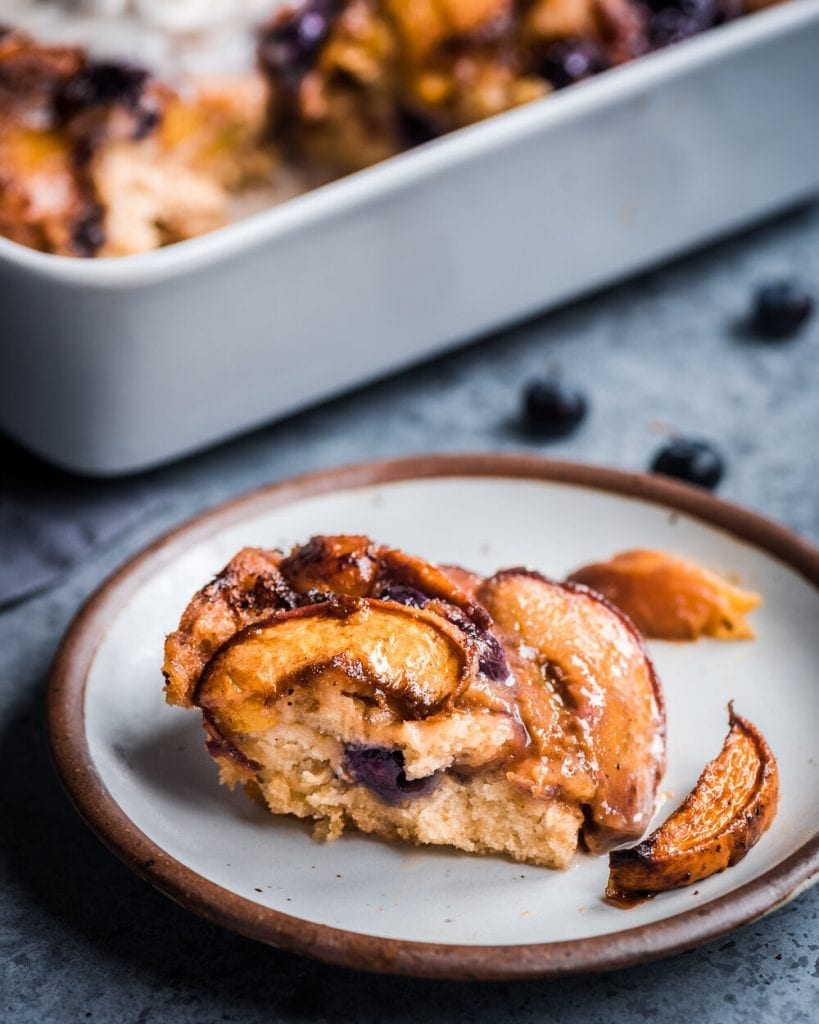 No coconut sugar for the peach-blueberry filling? Brown sugar works the same.

While this is a peach cobbler, in the event you have nectarines instead of peaches, I’m sure this would be an equally delicious nectarine cobbler.

No blueberries? Substitute with blackberries or raspberries.

No oats at home? You can just add an equivalent amount of additional flour.

If peaches are no longer in season, you can try making this with frozen peaches. One reader who did so recommends defrosting the peaches a bit and pat somewhat dry before mixing with the spices and blueberries. 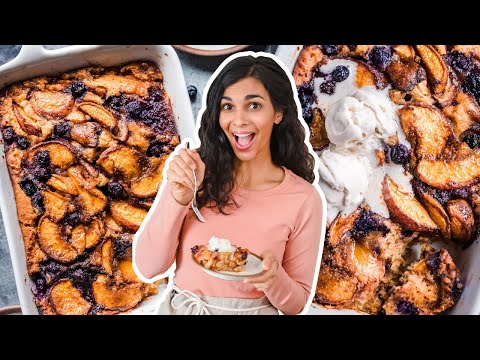 My FAVORITE Vegan Dessert for Summer 🍑

If you give this Vegan Brown Butter Peach Cobbler recipe a try, be sure to tag me on Instagram with your recreations and please comment with your feedback below!

A delicious twist on the classic Southern peach cobbler. Peaches and blueberries get swirled with vegan brown butter and cobbler, making for a cake that’s sticky and caramelized on the outside yet fluffy and tender on the inside. It’s truly the best vegan peach cobbler!
Prep Time: 35 mins
Cook Time: 45 mins
Total Time: 1 hr
Course: Dessert
Cuisine: Baking, Southern
Diet Vegan
Serving size: 10

* Regarding pan size, I used a 2-quart pan that’s roughly 11x7x2.5 inches, which is fairly deep for a pan that size. The batter filled up to nearly the top of this pan, so if your pan is slightly smaller or less deep, I recommend not overfilling it to the top (you can leave some of the batter + fruit filling aside and put it in a ramekin for a single-serving cobbler). Some readers have made it with a 3-quart rectangular pans such as 13x9-inch pans, as well as large 12-inch cast iron skillets with good results. If your cast iron skillet is smaller (e.g., 8-10 inches), you’ll have leftover batter, but you can make a single serving cobbler in a ramekin!
Calories: 298kcal | Carbohydrates: 52g | Protein: 4g | Fat: 10g | Saturated Fat: 2g | Polyunsaturated Fat: 3g | Monounsaturated Fat: 4g | Trans Fat: 1g | Sodium: 260mg | Potassium: 165mg | Fiber: 2g | Sugar: 31g | Vitamin A: 753IU | Vitamin C: 4mg | Calcium: 105mg | Iron: 2mg