I try to incorporate turmeric into my diet as much as possible. It’s one of nature’s finest superfoods, and Indian people LOVE it. Seriously, we use it as a panacea for any ill. Have a cold? Drink turmeric water. Joint pain? Wrap your joints in a turmeric paste. Feeling down? Drink turmeric milk. So today I thought I’d share my recipe for a Vegan Golden Milk Turmeric Latte.

First, let’s talk about what makes turmeric so healthy.

The main active ingredient in turmeric is curcumin, which has powerful anti-inflammatory properties that boost the immune system. I learned this as a child when my sister sprained her ankle while we were playing dodgeball, and my aunt–instead of applying an elastic bandage or wrap, as we Westerners tend to do–made a turmeric paste and generously lathered it on my sister’s ankle. True story.

Turmeric is also an antioxidant superstar. This is because curcumin not only blocks damage-causing free radicals in the body, but it also stimulates the body’s own antioxidant defenses and mechanisms. 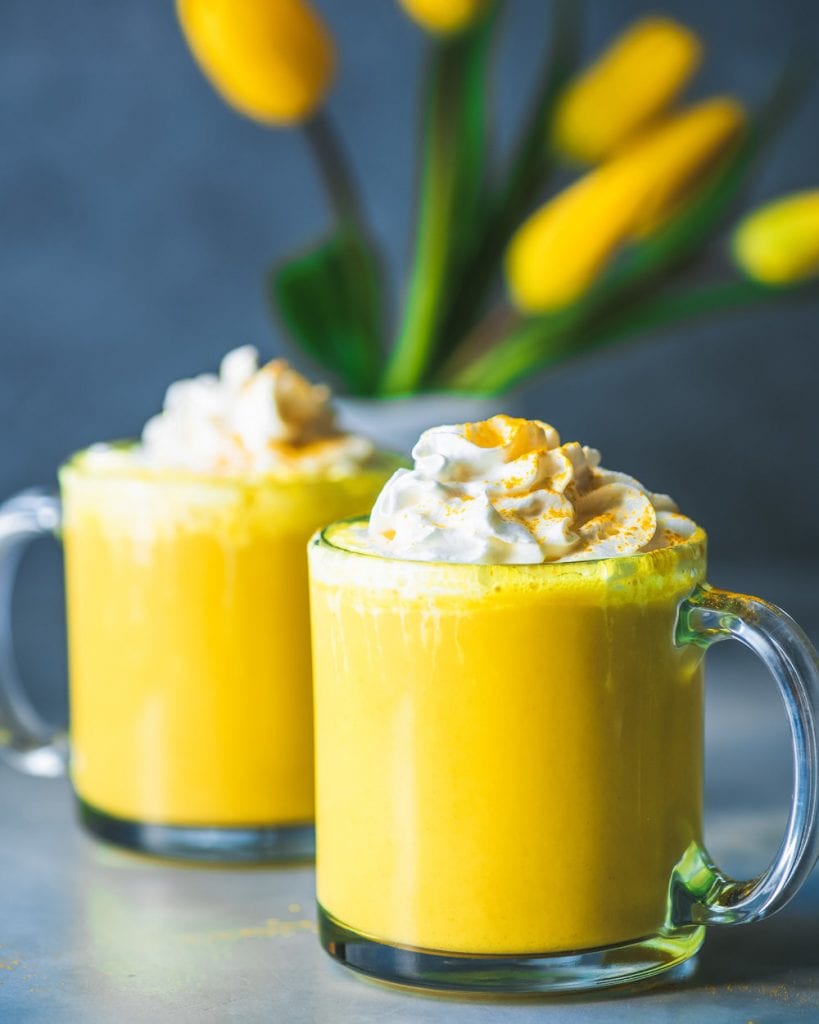 How to Get the Most out of Turmeric

Unfortunately, turmeric is not very bioavailable. That’s science speak for saying that it’s difficult for our bloodstream to absorb turmeric and reap the benefits. That’s because most of the curcumin gets metabolized before our bodies can absorb it. There are, however, two primary ingredients that can increase turmeric’s bioavailability, both of which you’ll find in this recipe.

First, black pepper. Black pepper contains an alkaloid called piperine, which enhances the bioavailability of many drugs, including turmeric. Studies have shown that combining just a little black pepper with turmeric can boost blood levels of curcumin by up to 2,000%!

Second, fat. Turmeric is fat-soluble (in contrast, it has a low solubility in water), so the presence of fat increases the solubility of curcumin. Combining turmeric with a healthy source of fat (such as coconut oil) allows the curcumin to be directly absorbed into the bloodstream. 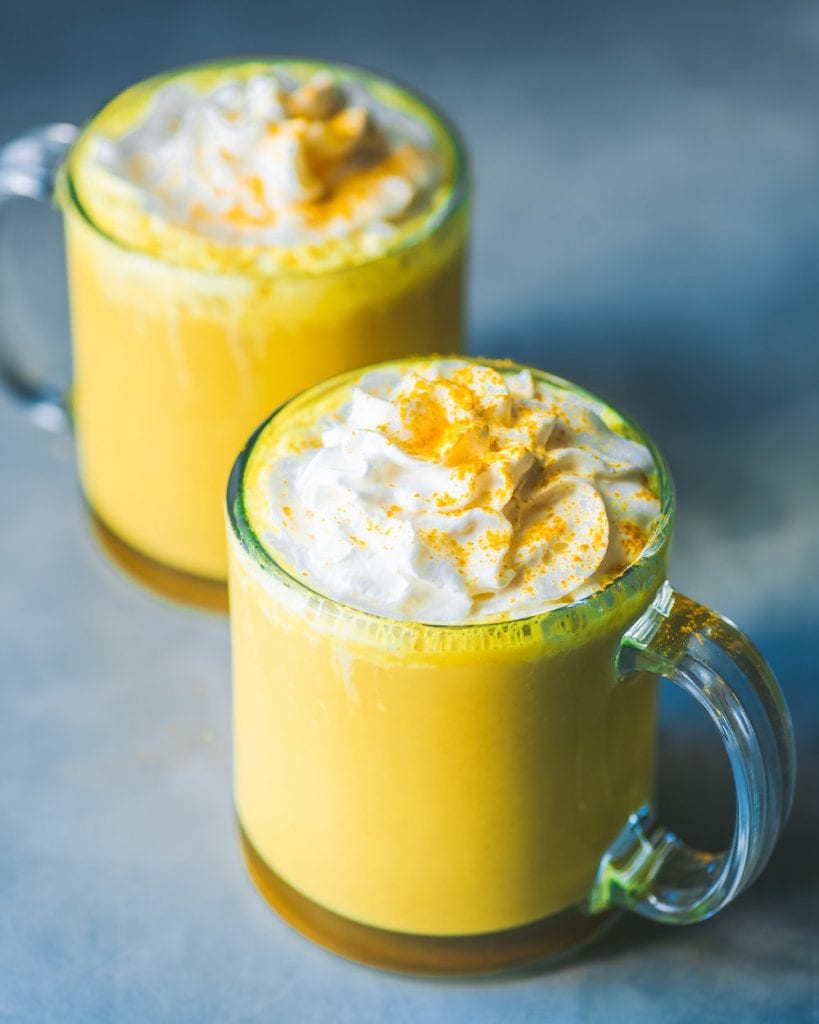 But turmeric isn’t the only nutritional superstar in this Vegan Golden Milk Turmeric Latte. Let’s talk about our other superfood friends!

Cinnamon: cinnamon contains large amounts of polyphenol antioxidants, which also have anti-inflammatory benefits. And some studies suggest that cinnamon may help reduce blood sugar, especially helpful for those with diabetes.

Coconut oil: as mentioned above, coconut oil helps increase the bioavailability of turmeric. 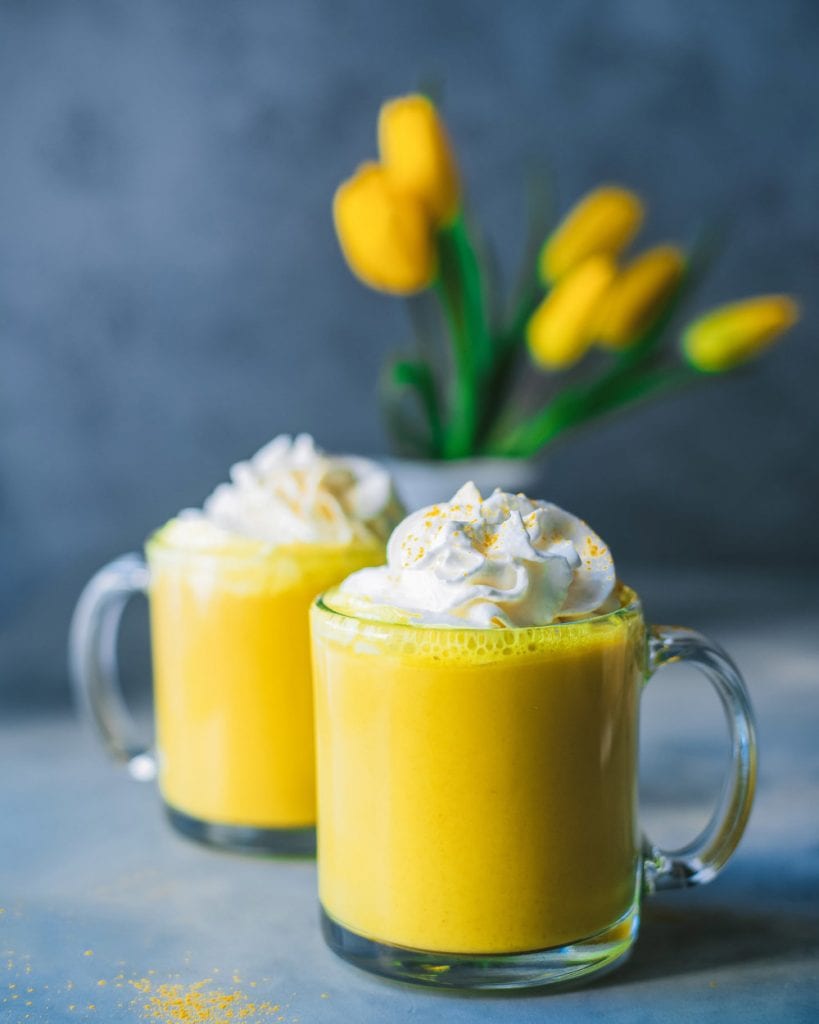