In the great hard-shell-taco vs. soft-taco debate, my advice is simple – why not both?

In these double decker black bean and corn salad tacos, a soft corn tortilla gets spread with refried black beans, which become the “glue” that helps them adhere to an inner hard taco shell.

It’s really the best of both worlds – you get the crispy crunchy goodness of a hard shell tacos without having them fall apart when you take a bite, thanks to the chewy soft taco wrapping.

And the corn and black bean salad filling is so good you could eat it on its own. Add to that an easy cilantro crema and you have a delicious vegan meal that can be on the table in under 30 minutes.

Looking for even quicker tacos? Try these 20-Minute Chickpea Tacos!

Weeknight and Meal Prep Friendly. The corn salad, refried beans and cilantro can all be made in advance to make weeknight dinners a breeze.

Peak Seasonal Ingredients. There are few things more delicious than corn and tomatoes at their peak flavor.

This recipe is dead simple so I don’t have a ton of advice for you, but here are a couple things to keep in mind.

Thinly slice the red onions and jalapeños. Onion slices and jalapenos get marinated in lime juice and olive oil for 15-20 minutes, which helps mellow out their flavors. By slicing both thinly, the marinade is able to cover more surface area and have a more pronounced effect.

For a nifty technique to shave the corn kernels without them going everywhere, watch the below YouTube video. The segment starts at the 1:00 mark in the video.

Are you in the mood for even more Mexican inspired recipes? Check out some of my favorites below: 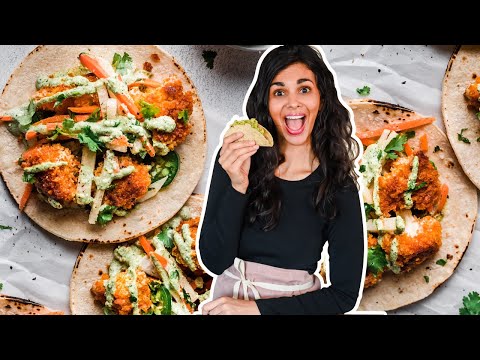 Okay, that’s all for me. If you enjoyed making these tacos, be sure to leave a comment below or tag me on Instagram!