I am so excited to share my latest fall comfort food obsession with you: One-Pot Vegan Pumpkin Alfredo! This recipe is super easy to make and comes together in just one-pot, so you get to save on everyone’s least favorite chore: washing dishes!

I recently shared a recipe for a Pumpkin Lasagna Soup that you guys seem to be really loving, but it is an Instant Pot recipe, and I know a lot of you don’t have an Instant Pot. So I developed this pasta because I wanted to share a recipe with a similar flavor profile and feel that everybody can make and enjoy on the stovetop.

And by everybody, I mean everybody—vegans, omnivores, meat-lovers, gluten-free eaters. This pasta is SO SO creamy and indulgent that your non-vegan family members would never even guess that it’s vegan. And I’ve even tried this recipe with gluten-free pasta and it worked out just as good, so gluten-avoiders can still enjoy it! 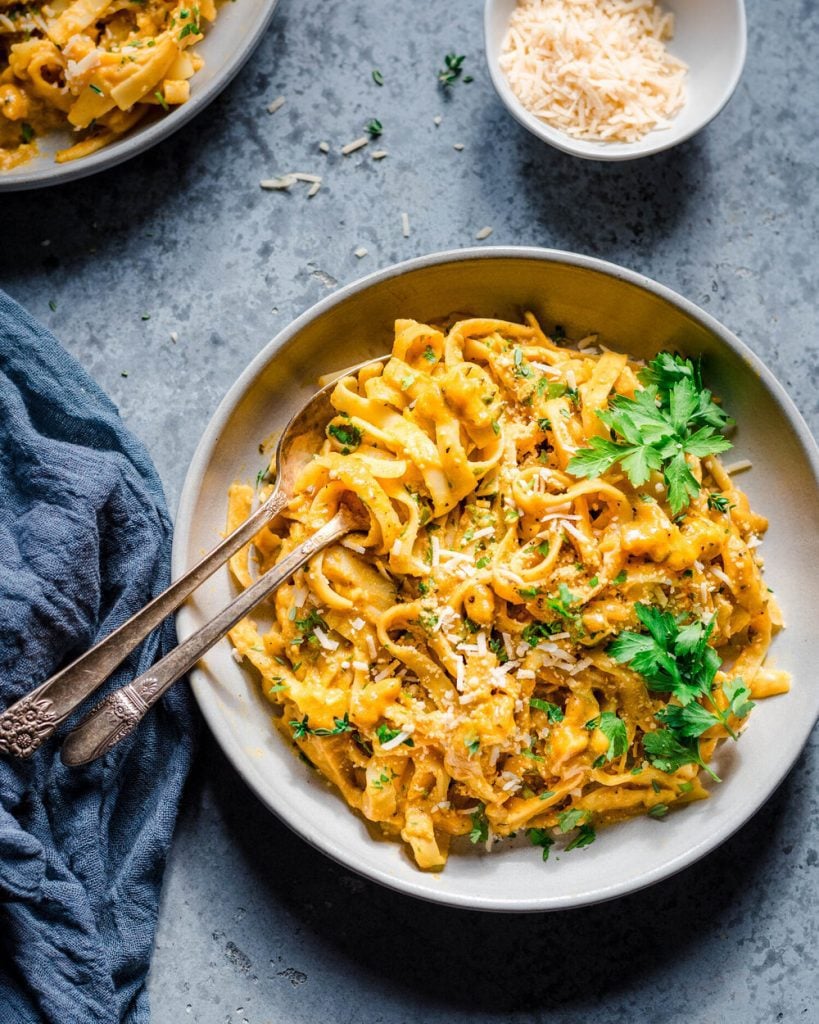 One pot dinner! Who doesn’t love a one=pot meal? One pot = fewer dishes to wash!

Fall comfort food: Imagine a creamy alfredo pasta, and then add in the warmth of woodsy herbs, pumpkin, and nutmeg. It’s such a comfy and indulgent recipe for cold weather and pumpkin season!

Weeknight-friendly. From start to finish, including all the prep time, this dinner is ready in 45 minutes or less.

Easy to customize. Feel free to make this your own meal. Toss in frozen peas at the end, pair with a side of roasted broccoli, or. bulk it up with some beans or tofu or your favorite protein source.

How to Make One-Pot Pumpkin Alfredo

This recipe starts with a fancier version of a roux, a mixture of flour and fat cooked together to thicken sauces. Traditionally, a roux starts by heating a fat source (e.g., olive oil, butter) and then adding an equal amount of flour, and stirring to combine until it forms a paste. Then, you pour in the liquid to create the sauce (usually cream or milk).

In this recipe, I use olive oil as my source of fat, though you could use vegan butter if you wanted something really rich (or half butter, half olive oil). But instead of just adding the flour right away, I add some aromatics to infuse some depth of flavor into this roux.

First, heat a heavy nonstick frying pan with the olive oil. Sauté the diced onion until it’s starting to brown and softened. Then add the garlic and trio of herbs: thyme, sage, and rosemary. These herbs pair incredibly well with pumpkin and bring so much aroma and fall goodness to this pasta.

Once the aromatics fragrant, add in the flour and stir to incorporate. Then, pour in the “lite” coconut milk. Make sure you stream in the milk slowly and gradually, in stages, and use your other hand to whisk the mixture the entire time. If you just dump all the milk in at once, you risk your flour and milk clumping together.

Add in the pumpkin puree, along with salt, pepper, and nutmeg.

Since you are cooking the pasta directly in the sauce, you want to make the sauce is as smooth and uniform in texture as possible (a chunky sauce will make it harder for the pasta to cook evenly). That’s why you’ll use an immersion blender to blend the sauce up and crush those pieces of onions and garlic.

Next, add in the pasta, vegetable broth, and two other ingredients for extra flavor: nutritional yeast and miso. Both ingredients bring a lot of umami to this dish, which is always welcome in savory vegan food.

Bring to a simmer and stir the pasta frequently until it’s al dente, about 20 minutes. 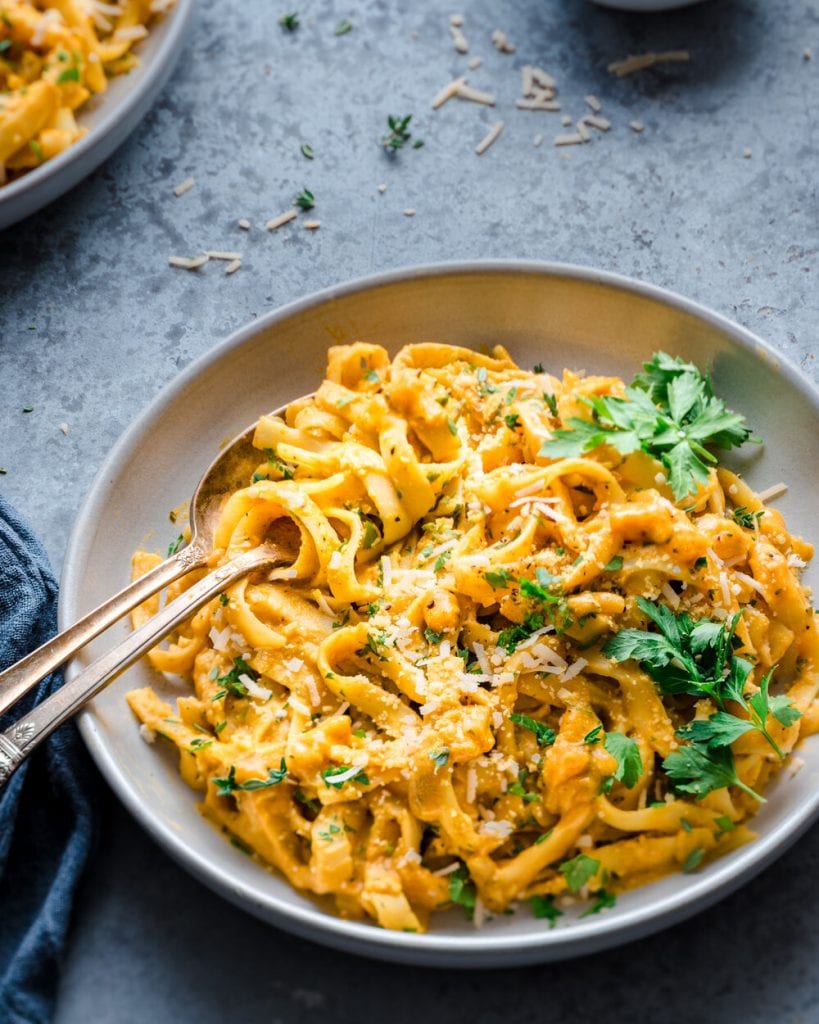 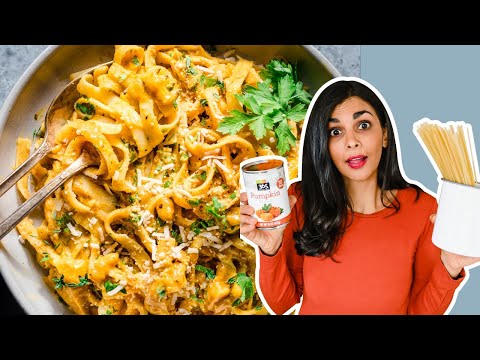 First things first, I highly recommend using a deep NONSTICK frying pan, not a ceramic or steel pan. I tried making this recipe in my ceramic Le Creuset Dutch oven, and it required a lot more oil and some of the pasta was still stuck to the bottom of the pot.

So, if you don’t have a nonstick soup pot or a deep, large nonstick frying pan like this, I would either (a) be comfortable using more oil than called for in this recipe and reallllly stir the pasta while it’s cooking or (b) cook the pasta and sauce separately (sadly, this won’t be a “one-pot” recipe anymore).

Second, and very importantly, you MUST stir the pasta fairly frequently while it cooks (it takes 20 minutes to cook). If you don’t, THE PASTA WILL STICK TOGETHER AND NOT GET FULLY COOKED. I apologize in advance for yelling, but this is very important.

I recommend using a pasta claw/spaghetti server or a pair of tongs to toss the pasta around in the sauce every few minutes. Sure, it’s a little extra work, but you’re washing fewer dishes at the end of the day, so that is a definite win in my book!

This pasta dish is best served immediately, but the leftovers are pretty good too. I actually like eating leftovers cold (weird, maybe. but also delicious), but you can heat them up on the stove, adding a bit of nondairy milk as needed to thin out the sauce. 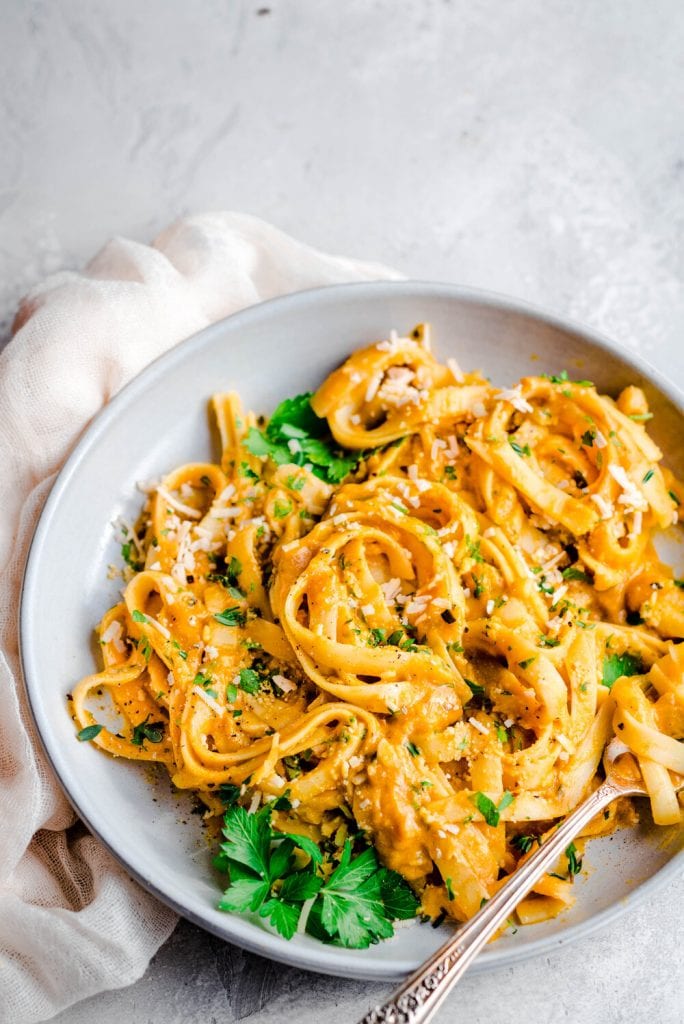 If you use a long pasta like fettuccine or linguine, you’ll need to break the noodles in half (or smaller if you prefer) with your hands. Otherwise, the noodles won’t be able to fully cook in the sauce.

For the liquid, I used low-sodium vegetable broth, but you could also use water. You might want to add a pinch more of salt if you do use water.

The reason I use “lite” coconut milk is that it’s the best texture for Alfredo-type sauces, but unsweetened oat milk is also equally great. If all you have is full-fat coconut milk, I recommend diluting it with some water (kind of like homemade lite coconut milk). Since we’re cooking the pasta directly in the sauce, the full-fat variety is too thick. On the other end, something like almond milk would be a bit too thin and the end result won’t be as creamy.

To make your own “lite” coconut milk, mix together 1 part full-fat canned coconut milk with 2 parts water, stir together until well combined. Then measure out 13.5 ounces (400 mL).

If you don’t have an immersion blender, you can either (1) transfer the sauce to a stand blender before adding the pasta, or (2) not blend the sauce and cook the pasta in a separate pot (obviously, this will no longer be a “one pot recipe”).

That’s about all you need to know about this One-Pot Pumpkin Pasta! If you make the recipe, be sure to drop a comment below and tag me with you recreations on Instagram!

Say goodbye to a sink full of dishes and hello to this one-pot pumpkin pasta! This is the creamiest pumpkin Alfredo pasta ever—you would never even know it’s vegan! This one-pot pumpkin pasta is like a fall hug in a bowl, with warming flavors of pumpkin and nutmeg and woodsy herbs like rosemary and sage.
Prep Time: 15 mins
Cook Time: 30 mins
Total Time: 45 mins
Course: Dinner
Cuisine: American
Diet Vegan
Serving size: 4

* For a gluten-free option, use a gluten-free all-purpose flour or rice flour in the roux. And use the gluten-free pasta of your choice. I tested this recipe with this gluten-free spaghetti made of rice and corn. You do need to make sure you stir the pasta well and frequently during cooking to prevent the pasta from sticking. ** To make your own “lite” coconut milk, mix together 1 part full-fat canned coconut milk with 2 parts water, stir together until well combined. Then measure out 13.5 ounces (400 mL). *** If you use a long pasta like fettuccine, you need to break the noodles in half (or smaller if you prefer) with your hands. Otherwise, they won’t be able to fully cook in the liquid. Also, this recipe is easier to make with a shorter pasta - you don’t have to break it up and it’s also easier to stir while cooking. **** I really recommend using a nonstick pan, not a ceramic or steel pan. I made this recipe in my ceramic Le Creuset Dutch oven, and it required a lot more oil and some of the pasta was still stuck to the bottom of the pot.
Calories: 528kcal | Carbohydrates: 70g | Protein: 13g | Fat: 22g | Saturated Fat: 9g | Polyunsaturated Fat: 2g | Monounsaturated Fat: 10g | Sodium: 728mg | Potassium: 477mg | Fiber: 8g | Sugar: 7g | Vitamin A: 14389IU | Vitamin C: 11mg | Calcium: 66mg | Iron: 3mg