One of my favorite cozy winter recipes is this Healthy Vegan Lentil Shepherd’s Pie. I came up with this recipe when I realized that the shepherd’s pie recipe from my cookbook was so popular.

And since many of my readers/followers don’t have an Instant Pot, I wanted to adapt the recipe from my cookbook to the stovetop (which is the traditional method of making shepherd’s pie). Sure, it requires a bit more work than the Instant Pot version, but the results are worth it!

Though there are a few different steps involved in this recipe, the actual cooking part is quite straightforward and not complicated. 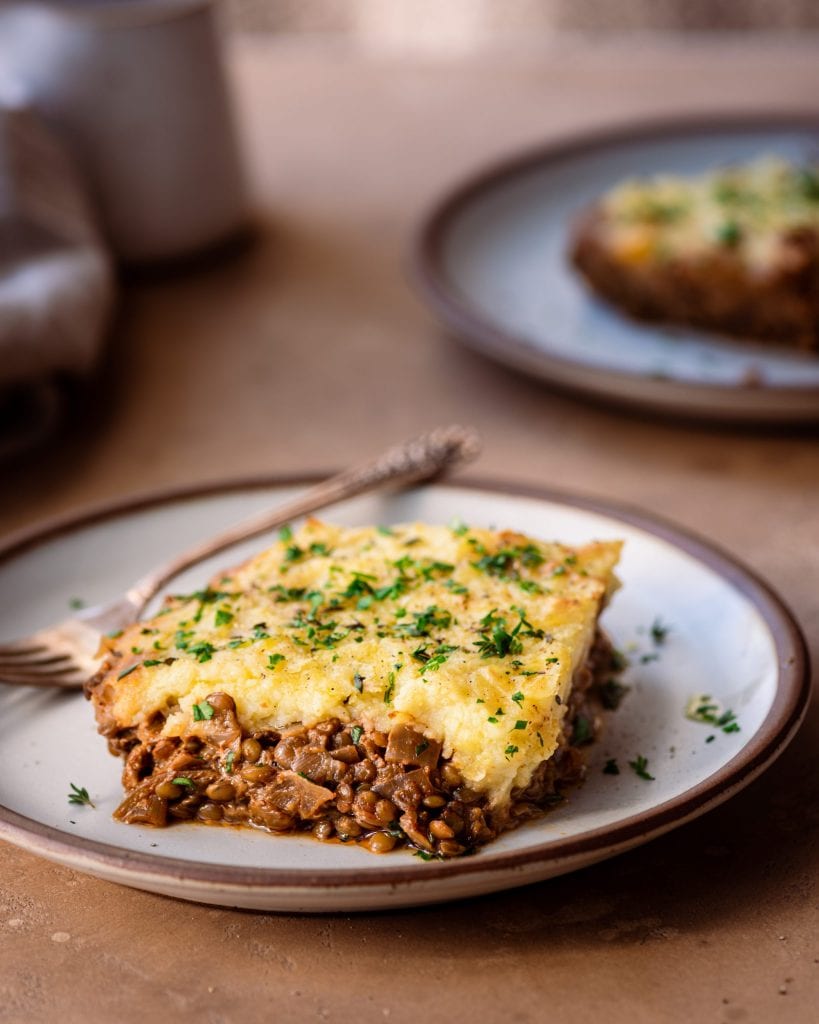 How to make a healthier vegan shepherd’s pie

As you might have noticed in the title, this is a healthy(ish) version of shepherd’s pie. For one, it’s not made with ground lamb (or beef), the traditional main ingredient in shepherd’s pie. Instead, the bulk of the filling comes from heart-healthy, protein- and fiber-packed lentils, so we’re already light years healthier than the traditional version.

Secondly, shepherd’s pie typically has a layer of mashed potatoes on top. To keep this version on the more wholesome side, I add cauliflower into the mix. To be clear, I don’t think of potatoes as an “unhealthy food.” Rather, I think of cauliflower as a nutritional superstar that adds extra fiber, vitamins, and antioxidants and very little starch. 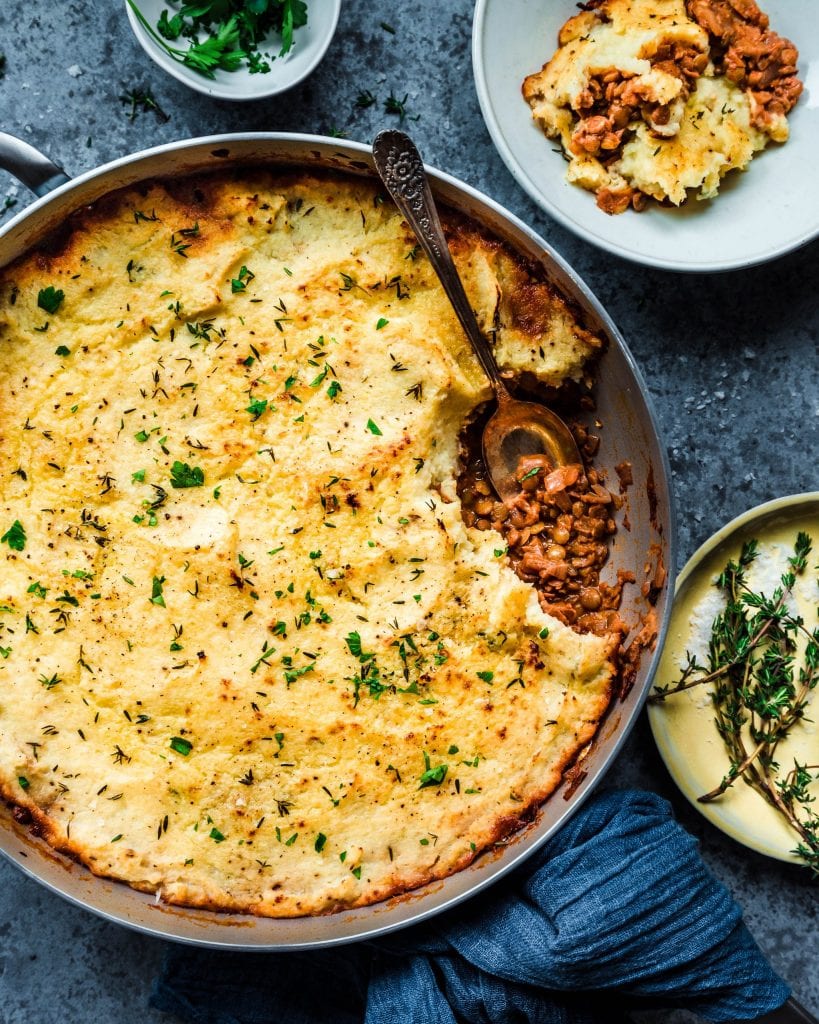 This is one of my favorite ways to cook lentils. You can also use these lentils in your weekly meal prep, or stuff them into vegetables, like in this Creamy Lentil Stuffed Butternut Squash.

Why? I find that the most flavor in this recipe comes from onions and garlic, and well, celery and carrots just aren’t that essential. Also, I am not a fan of peas. They’re mushy, so there’s that.

I cook the onions down until they’re nice and browned. I cook them well beyond the stage of sweating and turning translucent. It takes a few extra minutes, but adds lots of savory depth of flavor to this dish.

Fresh Herbs. I used thyme and rosemary in this recipe, but sage and oregano would also be good choices if that’s what you have. If you are worried about leftover fresh herbs going bad and don’t want to waste food, check out the herb- saving technique I use in this video (starts at 03:00 mark).

Tomato Paste. Tomato paste is an underrated, humble, inexpensive ingredient. It adds a thick, rich concentrated tomato-y flavor with a slight natural sweetness, along with notes of umami to this shepherd’s pie.

But we’re not treating tomato paste as it’s often used – simply stirred into a soup or sauce at the end as an afterthought. We’re cooking it down for a few minutes to help caramelize it.. This unlocks the full potential of the tomato paste and brings forth its boldest flavor.

Red Wine. Certain savory dishes get a dramatic flavor boost from red wine, and this is one of them. It brings out the earthy flavors of lentils and intensifies the aromas of this dish in a way that vegetable broth cannot.

Tahini. Not a traditional ingredient in shepherd’s pie, but I like stirring it into cooked lentils to add some richness. It makes the lentils creamy while still keeping them healthy (tahini is simply sesame seed paste).

Balsamic Vinegar. I also add a splash of good-quality balsamic vinegar to the lentil filling at the end, as the natural sweetness helps balance the salty and savory umami flavors.

Vegan Worcestershire Sauce. Worcestershire sauce brings a depth of flavor that enhances savory, meaty dishes and is commonly used in traditional shepherds’ pie. Check out the recipe note below for recommendations on vegan brands. 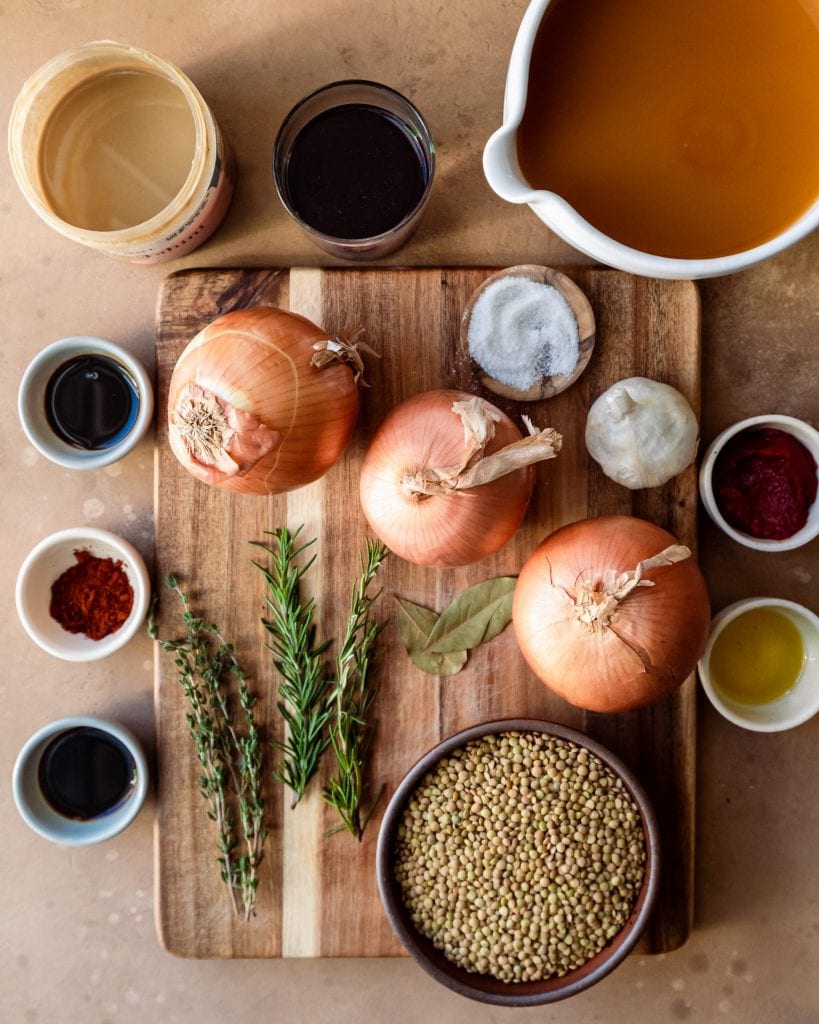 Russet Potatoes. I opted for Russet potatoes because their high-starch content makes for the fluffiest mashed potatoes.

Cauliflower. As mentioned, I add cauliflower into the mix to add more nutrients. Since potatoes take longer to boil than cauliflower, I cut the cauliflower into quite large florets and cut the Russet potatoes into eighths. That way, they take about the same time to cook.

Vegan Butter. Since these are mashed potatoes, a little vegan butter (not too much) feels necessary. But if you don’t want to buy or use vegan butter, a good-quality olive oil will also work.

Lite Coconut Milk. This is my favorite plant-based milk to use in mashed potatoes because it’s creamy but not too thick (as regular, full-fat coconut milk would be). If you don’t use coconut milk, another creamy plant milk such as unsweetened oat milk or cashew milk also works.. 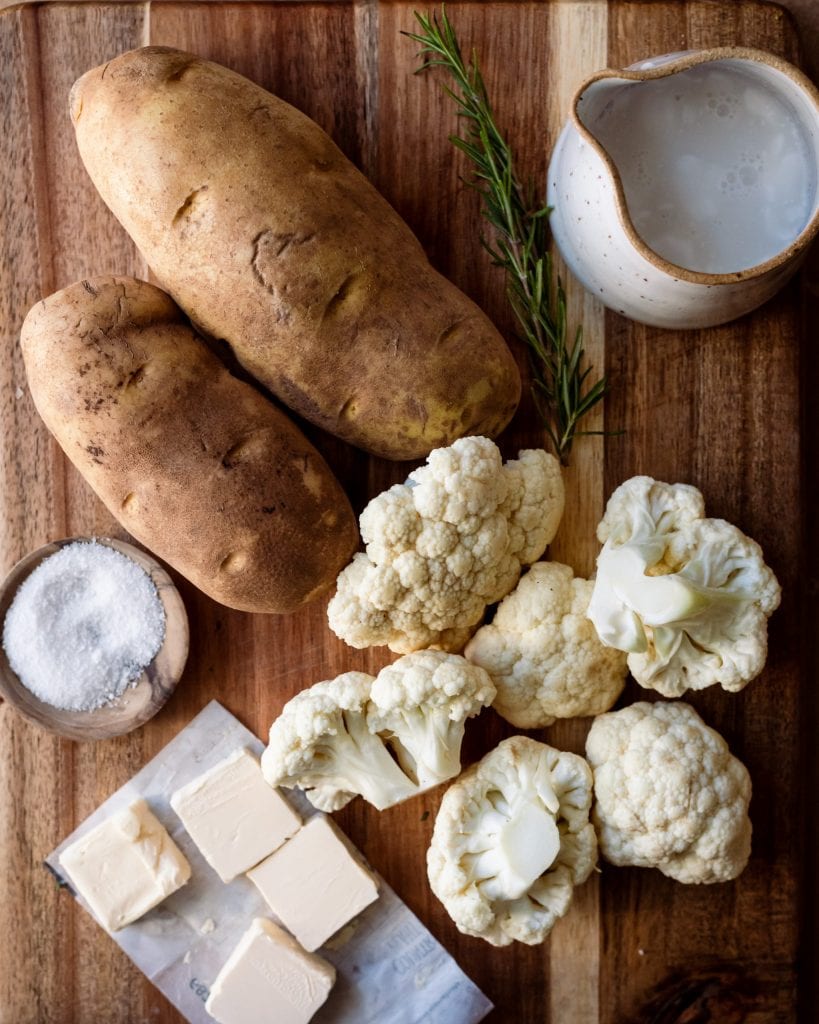 To avoid a watery mashed potato topping, you’ll need to drain the cauliflower very well, as it’s a water-heavy vegetable.

To make this recipe more indulgent (great for a holiday meal), follow these modifications.

To make this recipe more *even more flavorful*, try this tip.

Use homemade vegetable broth in lieu of store-bought broth. Or, use this vegan “chicken” broth seasoning, which adds incredible flavor to savory dishes. Note: it is quite salty, so you’ll need less salt in the lentil filling than the recipe calls for. You can also use a bit less seasoning per cup of water than the directions indicate.

To be able to scoop out solidified pieces of the “pie,” allow the shepherd’s pie to rest for at least 20 minutes in the pan. It will continue cooking and bring more structural integrity to the dish. That said, it still tastes delicious if you don’t let it rest. The texture will just be softer and messier to eat, like below. 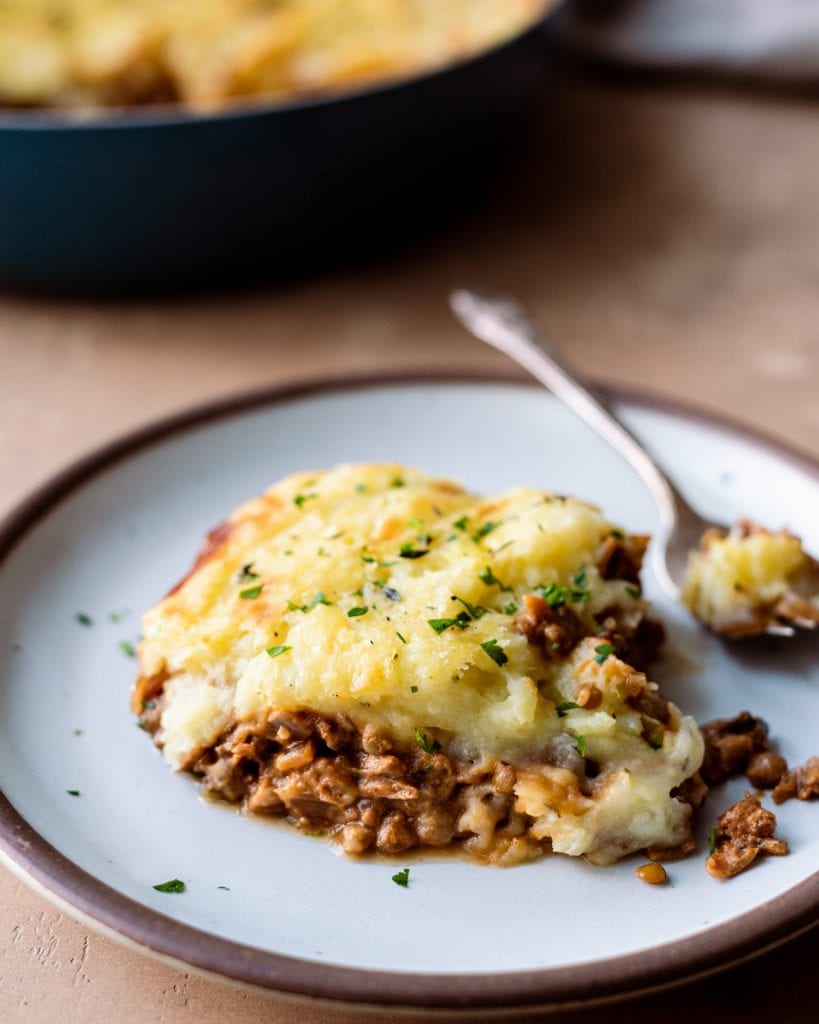 Can you substitute the red wine?

If you do not consume alcohol, skip the step of deglazing the pan with red wine. Instead, just start deglazing the pan with the vegetable broth. It helps to use a vegetable broth that is quite flavorful and rich (a homemade one, or my favorites are Imagine Organic and this vegan “chicken” broth seasoning). While I do think the wine adds something special, many readers have made this recipe without the wine with great results.

What kind of potatoes can I use for the shepherd’s pie topping?

I use Russet potatoes when I make this recipe with cauliflower. Russets seem to have a more similar texture and consistency to cauliflower than yellow potatoes, such as Yukon Gold potatoes.

Are my lentils cooked through?

30 minutes should be enough time to cook your lentils al dente, but not overdone or soft. It’s okay if the lentils feel firmer than you’d expect, as they’ll also cook in oven.

What if I don’t have a 12-inch ovenproof skillet?

Make the Lentil Filling in the largest skillet you have and then transfer it to a large (3 quart/3 liter) baking dish. Spread the topping on and bake as instructed.

Store leftovers in an airtight container in the fridge for up to 4 days. Or, in the freezer, for up to 3 months

What to serve with lentil shepherd’s pie

In the mood for even more cold-weather vegan comfort food? Give these recipes a try:

If you give this Lentil Shepherd’s Pie recipe a try, be sure to tag me on Instagram with your recreations and please comment with your feedback below!

* If you do not consume alcohol or don’t cook with it, just skip this step and start deglazing the pan with the vegetable broth instead of wine ** The tahini brands I regularly use are Soom Tahini, Seed + Mill, and the Whole Foods 365 brand. If you typically refrigerate your tahini, try to bring it to room temperature, as it’ll be easier to stir into the lentils. *** To keep this dish soy-free, omit the tamari and just add a bit more salt to taste. **** You can substitute this with unsweetened soy milk or oat milk. ***** If using golden potatoes instead of Russets, do NOT use an immersion blender - the potatoes will get gummy. Use a potato masher or ricer instead.