There is no shortage of mashed potato recipes on the internet. However, I have come across many vegan mashed potatoes recipes that purport to be “the real thing” but, let’s be honest, potatoes + almond milk ≠ mashed potatoes. Sorry, it’s not the same at all!

Which is why I am going to teach you how to make the BEST vegan mashed potatoes. They’re going to be silky and light and fluffy yet creamy and rich, the best of both mashed potato worlds, IMO. Plus, I’m sharing my secret weapon for the most flavorful mashed potatoes as well as LOTS of tips for making stellar mashed potatoes every time. 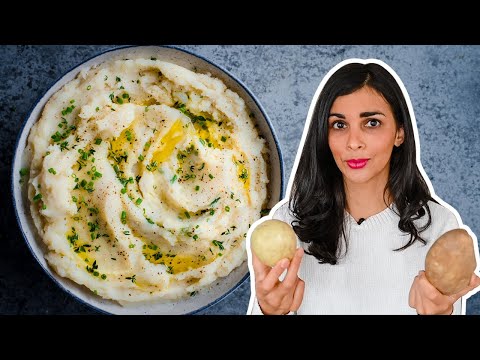 For a visual on how to make the best mashed potatoes, be sure to watch the Youtube video! 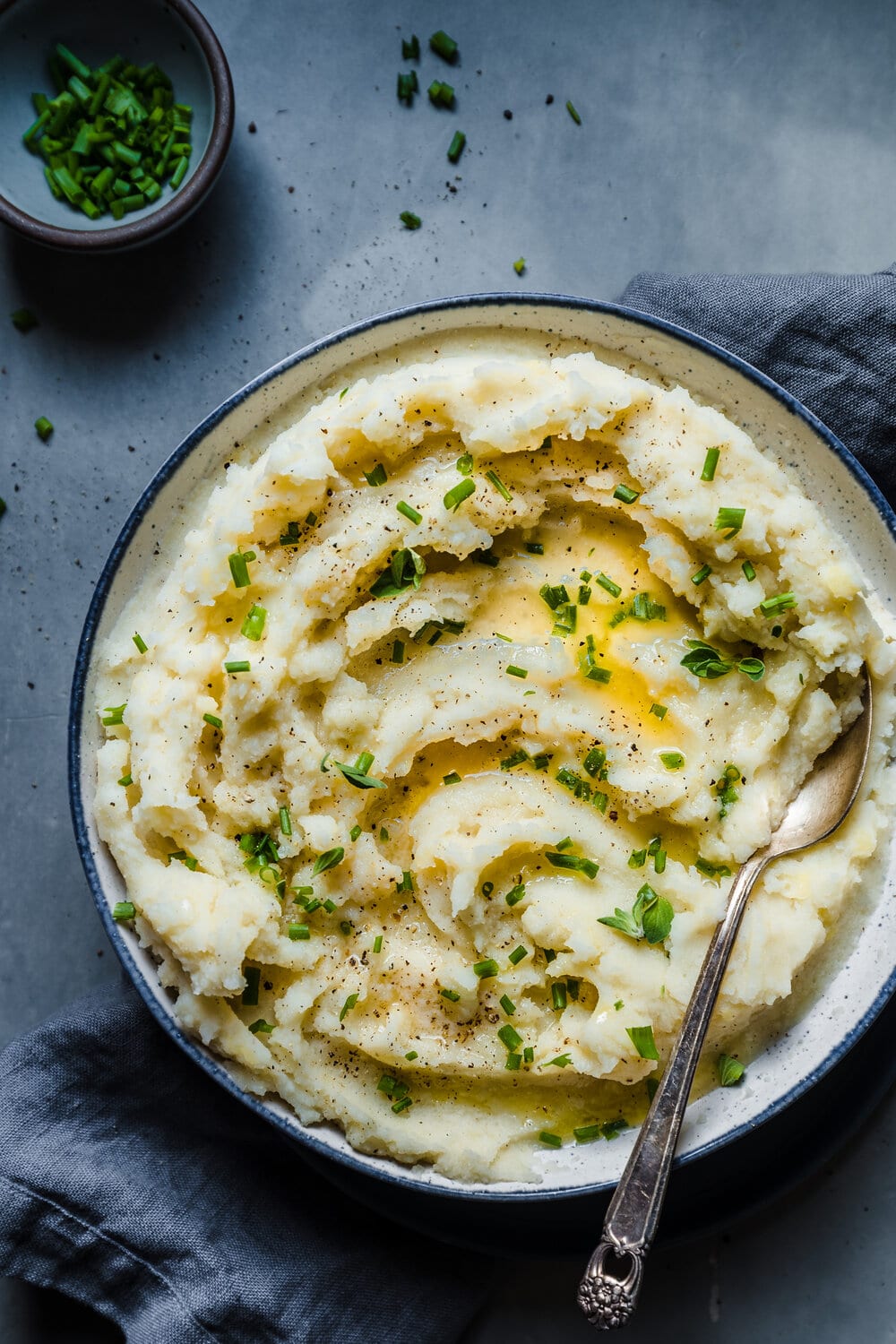 What variety of potato is best for mashed potatoes?

There’s a bit of science behind this magic, so let’s get nerdy. First, russet potatoes are a high-starch potato, which means they’ll bring the light, fluffy texture that you love about mashed potatoes. It also means they’ll easily absorb the vegan butter, vegan milk, etc.

So if you agree that the best mashed potatoes are simultaneously fluffy and creamy, you’re gonna want to try this potato combination! I use equal parts of both potatoes in this recipe. 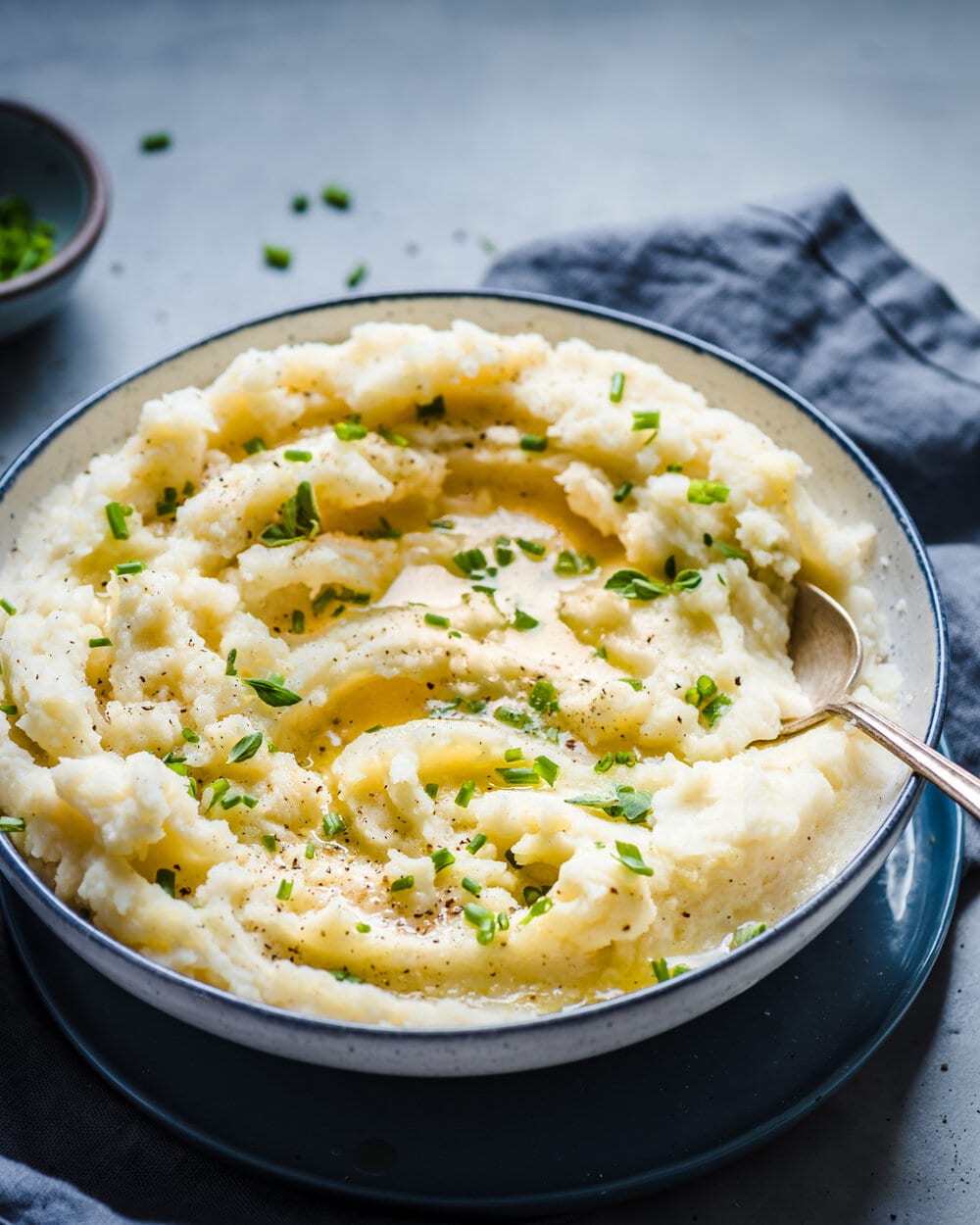 How to cook the potatoes

First things first, wash them potatoes because potatoes are dirty AF. They are literally crawling in dirt because they grow in dirt. I first peel the potatoes and then wash them because there is often dirt lurking under the relatively thin skin.

Then, chop up your potatoes. Nothing too small, but I prefer to cut my Yukon Gold potatoes into fourths and the Russets into eighths if they’re very large. If the Russets are more on the medium size, you can cut them into fourths since they tend to get softer a bit quicker than the Yukon Gold variety.

Next, place the potatoes in a large saucepan and cover with cold water. I learned this tip from my guru Ina Garten back when I was a teenager. If you add potatoes directly to boiling water, they’re more likely to cook unevenly than if you start with cold water. 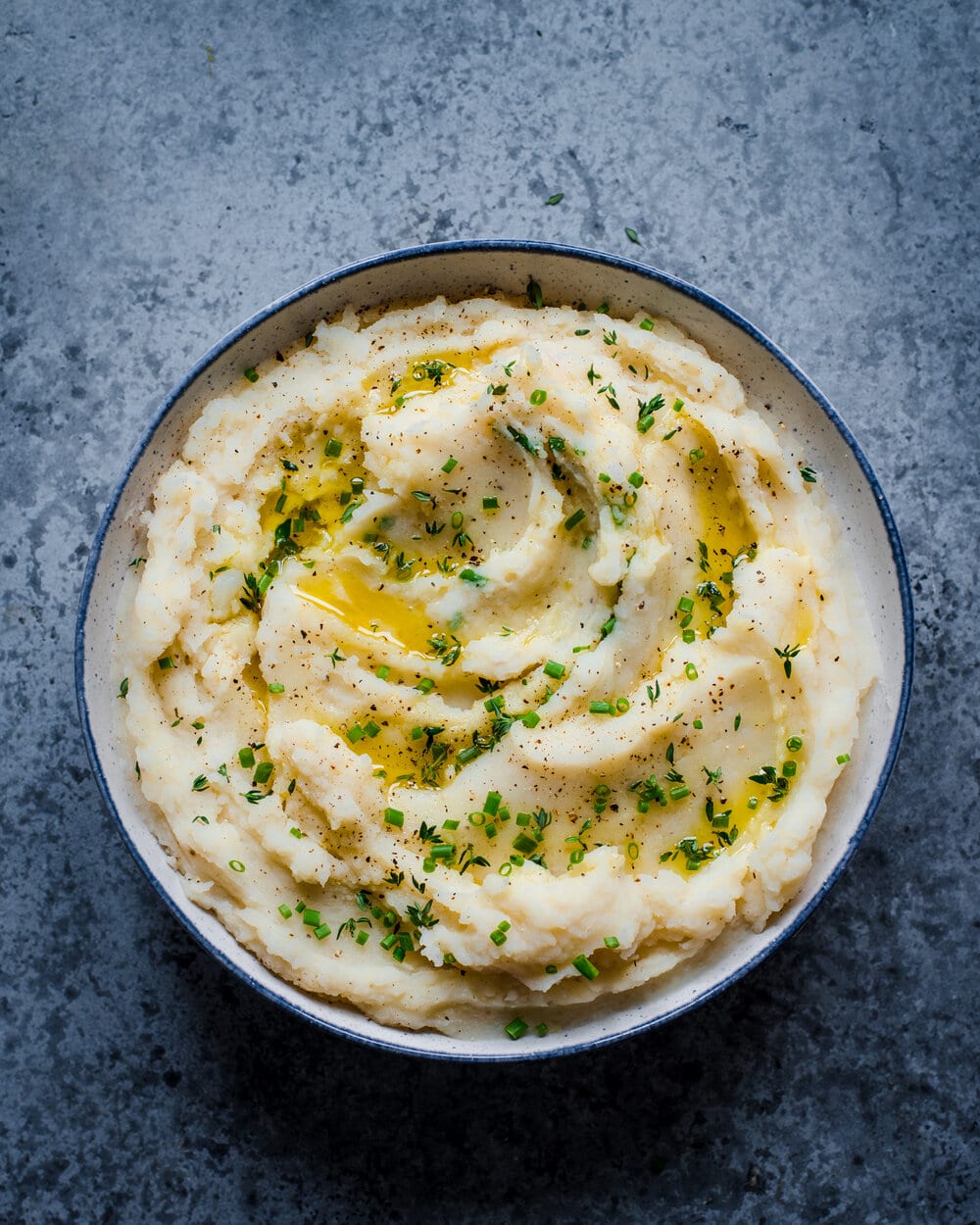 Once you cover the potatoes with water, please be sure to generously salt the water! I know some people are wary of salt, but if we’re being honest, the vast majority of sodium in our diets comes from processed foods and dining out. So unless you have a specific health condition such as hypertension, you don’t need to avoid salt in home cooking. And frankly, you shouldn’t, because salt is what makes food tastes like it should.

If you don’t salt your potato cooking water, your mashed potatoes just won’t taste as good. Again, it comes down to science. When you salt your cooking water, it infuses flavor directly into the potatoes, which makes them taste more flavorful in the end. And you can’t replicate that depth of flavor by just sprinkling on some salt on top of the mashed potatoes at the end.

I prefer to use Diamond Crystal kosher salt in most of my cooking, including here, because it has this nice light flaky texture. And I have never over-salted my food when using kosher salt because it is less salty, by weight, than table salt and sea salt (in contrast, I have definitely over-salted my food when using sea salt). Plus, it’s cheaper than sea salt, which I reserve for desserts or when I otherwise need a fine grain salt.

Once your (salted) water is boiling, the potatoes should take about 15 minutes to soften (20 minutes at the most). To test them, insert a fork or metal skewer into a potato. There should be no resistance. The potato should be very soft and almost but not quite falling apart. 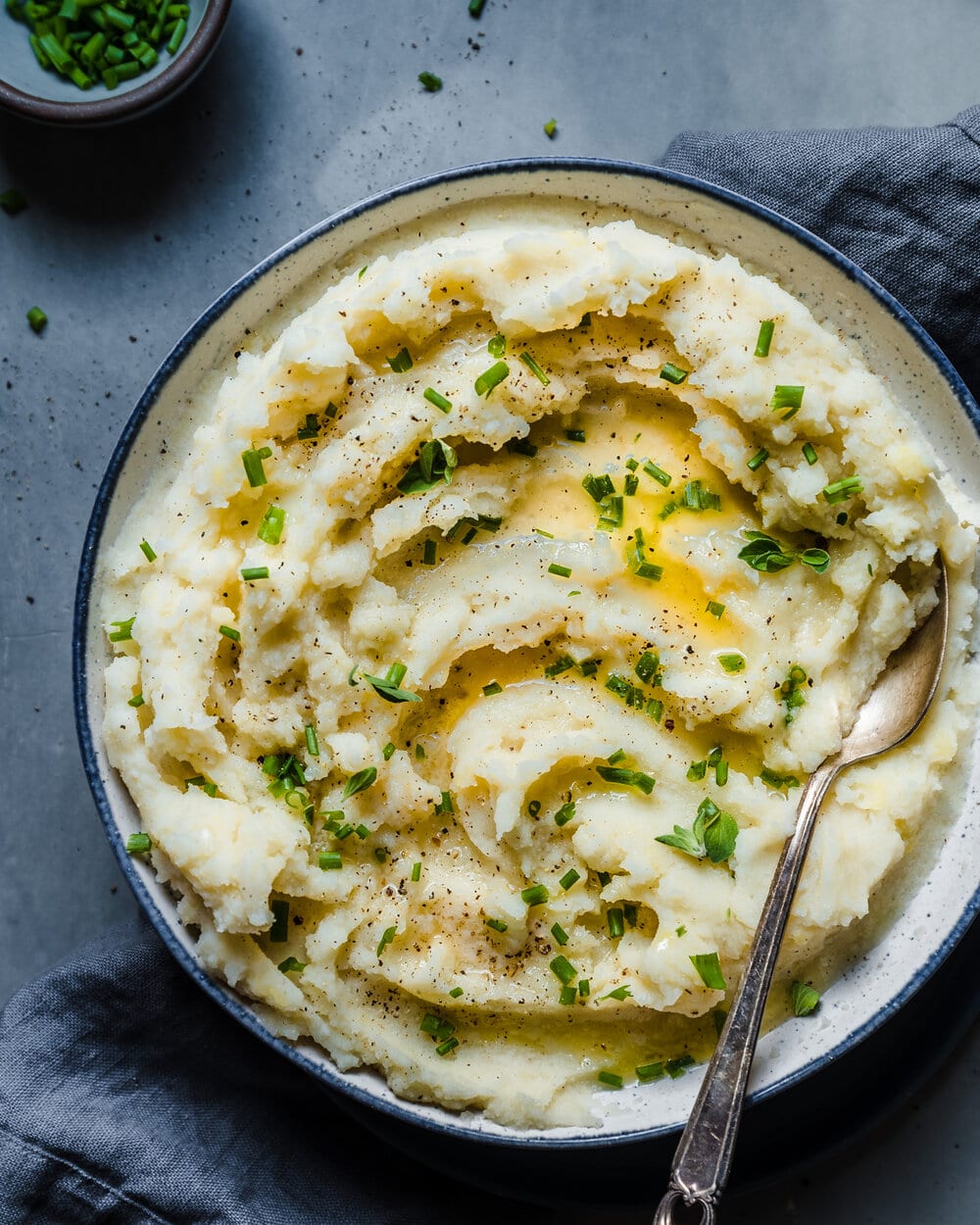 I’ve seen (and made) traditional mashed potatoes with half and half, heavy cream, whole milk, butter, sour cream and parmesan cheese.

So to make up for all that creaminess and rich flavor, we have to add a few key ingredients to our vegan mashed potatoes, and my secret weapon is miso butter! It adds such a complex, rich, savory taste to these mashed potatoes.

To make the miso butter, I simply cream together vegan butter and mild miso paste to make the most flavorful butter you will ever taste! I use Country Crock’s Plant Butter because it works just like traditional butter (trust me, I used to use a lot of dairy-based butter in my pre-vegan Thanksgiving menus). And these vegan butter sticks soften just like traditional butter! I like to take a stick of the Plant Butter (you need 6 tablespoons for this recipe) out of the fridge before I start cooking the potatoes so it’s fully softened when I’m ready to mash the potatoes. Depending on how warm your kitchen is, it can take 30-60 minutes to fully soften. To speed up the process of softening the butter, you can always slice the butter into small pieces. If you want to see what the texture of the miso butter should look like, be sure to watch the video.

When you cream the butter together with the miso paste, it becomes the most delicious tasting concoction. You might want to make a larger batch of it, form it into a stick, and store it in the fridge. It’ll come in handy when you want to slather it on a toasted baguette or stir it into risotto (it is sooo good this way).

In case you’re not familiar, miso paste is made from fermented soybeans and it’s a really concentrated form of umami. I love incorporating plant-based sources of umami into my savory recipes as often as possible because it brings that rich mouthfeel and flavor that everyone craves.

The best way to mash potatoes

I grew up seeing my mom mash potatoes with contraption that I have never seen anywhere outside of india. It was a handheld, windup device that was part electric mixer, part potato masher.I took that to mean that I could make mashed potatoes with an electric mixer, and for awhile, I did. And they were good.

But my mashed potatoes became great when I started using a ricer. A ricer is the best tool I’ve used for mashing potatoes, and I’ve tried all the tools–various potato mashers, an electric mixer, a food processor, and the above mentioned utensil from India. And you get the fluffiest potatoes, by far, when you use a ricer.

You can get a ricer at a kitchen store or on Amazon for $15-25. If you’re not sold yet, just check out the video to see how cool a ricer is in action. If you don’t have a ricer, you can also use a food mill. And If you don’t want to buy a ricer, I’d recommend using a potato masher. If not, then an electric handheld mixer (low speed only). Whatever you do, do NOT use a food processor. Unless you like gooey, dense, gummy mashed potatoes. Potatoes are full of starch, and starch doesn’t like to be jostled around and handled so heavily. Avoid the food processor!

Before you add in the miso butter or any of your creamy ingredients, mash the potatoes up (or rice them if you’re using a ricer). Then pour in your ingredients. Make sure you’ve kept your add-in ingredients warm. If the miso-butter or vegan milk are cold, it will cool down the potatoes and it will be difficult to incorporate them into the hot potatoes.

For this particular recipe, I heat the miso butter in a saucepan until it’s almost melted. Then I pour in some “lite” coconut milk and whisk to combine. I keep it on the lowest heat to stay warm until I’m ready to use it, but you don’t want it to boil.

Once your potatoes are mashed/riced, pour in the warm miso-butter-milk mixture and fold in gently with a wooden spoon or silicone spatula. You want to be gentle because, again, starches like to be handled with care.

And serve as soon as possible because mashed potatoes are always best served immediately. Of course, if you have leftovers, they’ll still be good. If they’re too thick for your liking, add them to a saucepan with a bit of nondairy milk and heat until they’re a bit looser and warmed through.

I hope you enjoyed this tutorial on How to Make The Best Vegan Mashed Potatoes! If you found it helpful, be sure to leave a comment below or over on Youtube!

Making a plant-based Thanksgiving but don’t want to miss out on mashed potatoes? Read on for an in-depth guide on How to Make The Best Vegan Mashed Potatoes, including how to achieve fluffy yet creamy mashed potatoes and my secret weapon for taking your mashed potatoes over the top!
Prep Time: 15 mins
Cook Time: 45 mins
Total Time: 50 mins
Course: Appetizer, Side Dish
Cuisine: American
Diet Vegan
Keyword: gluten-free, nut-free, potatoes
Serving size: 6

* If you want a more pronounced miso flavor, you can add a bit more of miso paste. I recommend no more than 2 1/2 tablespoons. Otherwise, the mashed potatoes taste very much like miso.