I posted a “what I eat in a day” series of Stories on Instagram the other day, and as soon as I posted a photo of these fudgy vegan brownies (yes, I had three in one day, okay!), the DMs started flooding in.

Recipe pls! omg i need the recipe! NEED this recipe!

So, I had to oblige. 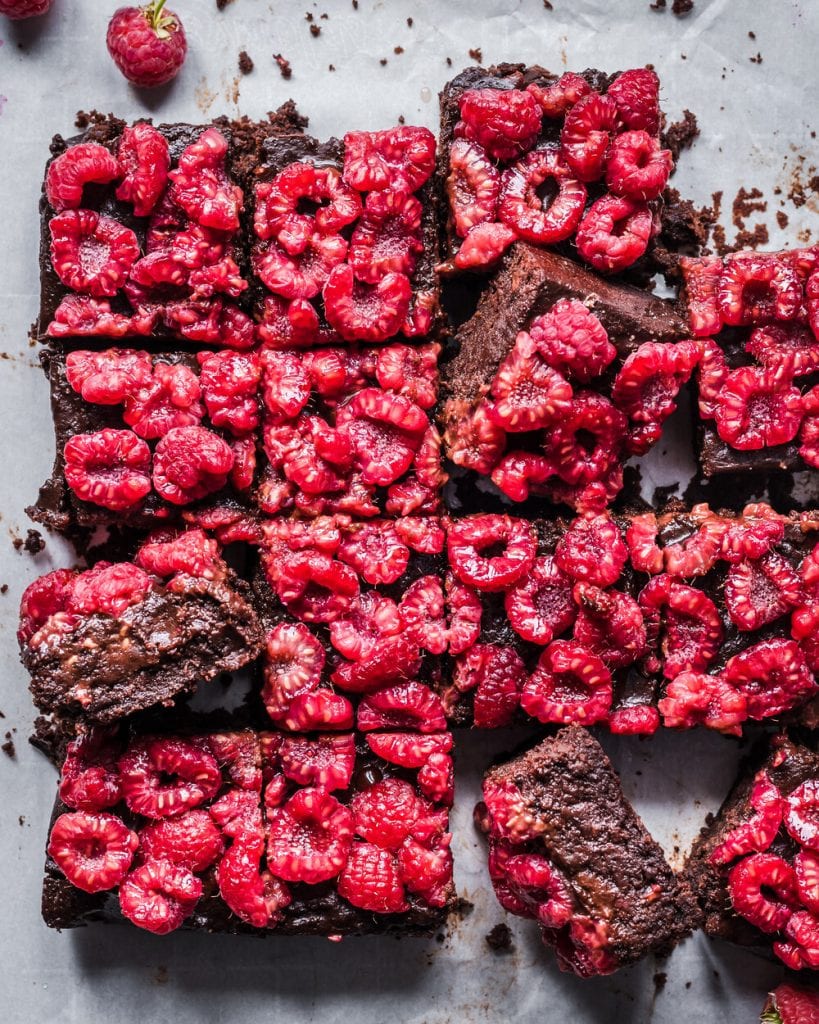 These brownies are very fudgy with a slight chewy bite and packed with morsels of dark chocolate. If that weren’t amazing enough, they get covered with a three-ingredient chocolate glaze and lots of raspberries. The raspberries are the perfect tart counterpart to the sweet, richness of the chocolatey brownies.

Of course, if you can’t find raspberries where you live, you can omit them.

These brownies are fudgy, rich, gooey, and a little chewy. No cakey brownies here!

Raspberry and chocolate is my favorite dessert combination, as the tartness of the raspberries cuts the richness of the chocolate perfectly.

I fed these brownies to a group of five omnivores, and they were all amazed. One of my friends ate three brownies in one sitting and happily asked if there were more brownies left. Sadly, he had eaten the last brownie, so the answer was no.

In contrast, adding a melted pool of chocolate essentially adds more liquid, making brownies more moist, dense, and gooey. But if you want to combine cocoa powder and melted chocolate, you get a little bit of both, which often results in chewy brownies. That’s what I do in this recipe, and the result is fudgy brownies with a slightly chewy bite.

Some of the chocolate chunks will almost melt into the brownies, which means rich fudginess, but other chunks will stay firm (especially larger sized ones), providing a nice little solid piece of chocolate to bite into. For these chocolate chunks, I use the same dark chocolate used in the batter, but if you have vegan or dairy-free chocolate chips on hand, you could easily use those instead.

If you’ve ever baked brownies that came out a bit dry, you likely baked them for too long. I recommend checking your brownies at least 5 minutes before you think they’ll be done. Take them out of the oven and insert a toothpick.

The perfect time to remove brownies is when there are moist crumbs stuck to the toothpick. At this point, you might even think the brownies aren’t fully baked yet, but brownies continue to cook and set up while resting, especially brownies made with melted chocolate (as in this recipe).

If there are no crumbs, sadly, you have overbaked your brownies (oops!).

To clarify, you are looking for actual crumbs, not wet, gooey batter. If you get liquid batter on your toothpick, the brownies still need a bit more time in the oven.

Also keep in mind that all ovens are different! I include a time range of 20-25 minutes because every oven is different. If your oven isn’t calibrated, I highly recommend getting an inexpensive oven thermometer such as this so you know exactly what temperature it is inside your oven.

I recommend using a 70% dark chocolate for the best results. If you like your chocolate really dark, feel free to use a more intense dark chocolate in the 80-85% range, but they will be less sweet. Alternatively, you could use a slightly sweeter chocolate, such as 60%.

If you go the latter route, I would use a few tablespoons fewer of brown sugar, or omit the chocolate glaze; otherwise, the brownies might be too sweet.

When you are done making the brownie batter, the texture of the batter will be very dense and thick. It might feel almost like a chocolate ganache. I put together a video for you so you can see what I mean. However, if the batter feels too thick or dry, add in 2 tablespoons of boiling water, 1 tablespoon at a time, stirring to combine until the batter is a bit looser.

The chocolate glaze is made with just three ingredients—cocoa powder, coconut oil, and agave nectar—and takes 2 minutes to make! I use agave because it is very viscous and help the glaze adhere really well to the brownies, but you could also substitute maple syrup. And once you refrigerate the glazed brownies, the glaze permanently adheres to the brownies, making them even tastier!

When I make really rich chocolate desserts, I like to add something tart to help balance the sweet richness, such as in this chocolate cheesecake with cranberry compote. Similar principle here: the chocolatey fudginess is nicely counterbalanced by the generous amount of raspberries, making each bite a complete delight.

If your raspberries, are on the larger side, I recommend slicing them in half. It makes for a prettier presentation and makes them easier to eat.

How to store these brownies

Of course, you can avoid this problem by storing the brownies in an airtight container in the fridge. If stored in the fridge, you can bring them to room temperature before eating if you want a more traditional brownie texture.

If you give these Fudgy Vegan Chocolate Glazed Brownies recipe a try, be sure to tag me on Instagram with your recreations and please leave a comment below!