Life is too short for sad, one-dimensional brownies. That’s why you need the absolute best vegan brownies in your life… brownies that are the perfect mix of fudgy and chewy, and with an irresistible crinkle top.

I can’t wait for you to try them!

Special shout out to Dutch process cocoa powder. It’s alkalized, meaning the natural acidic flavor has been washed away. Its flavor is pure, rich, and deeply chocolatey.

An ultra-enticing and shiny crinkle top

Once you get a glimpse of crinkle top brownies, you know you can’t hold back. The texture is delightful: wispy, delicate, ridged, and flaky. When paired with a fudgy interior, the contrast is too good to describe in words.

Unfortunately, this is almost never found in vegan brownies.

Typically, the secret to the flaky crinkle top on brownies comes from eggs. But I discovered you can achieve the same results by whipping aquafaba and sugar together.

I tested this method 11(!) times and ended up with a crinkle top every time. Can other vegan brownie recipes say the same? I don’t think so!

PS: These brownies even work gluten-free! Head to the FAQ section for tips!

Because you said so!

I don’t call these the “best vegan brownies” lightly. It’s proven by the more than 390 five-star reviews!

Here’s what readers are saying:

Jennifer says, “They are THE BEST EVER BROWNIES I have had in my entire life, vegan or not!!”

Jackie says, “Hands down BEST brownies I have ever eaten. No joke. I followed the recipe to the T and it couldn’t have been more perfect. I can’t believe these are vegan.”

Tamara says, “I cannot believe how fudgy, chewy, and delicious they are. Like a million other commenters on here, I never thought I’d find good brownies again after going vegan. They’re amazing and totally live up to the hype.”

Aquafaba. The liquid from a can of chickpeas. After some trial and error, I discovered that you can get vegan brownies with a shiny, crinkle top by vigorously whipping aquafaba and sugar together for several minutes before adding it to your wet ingredients.

It’s an unconventional ingredient in a brownie recipe but it works amazingly well here. My fan favorite banana bread is another vegan baked good that uses aquafaba to great effect.

Substitute: We don’t recommend substituting this, as it’s a key ingredient in making these so special.

Cane sugar. I use a fair amount of cane sugar for the above reason and because it gives the brownies structure (often missing in crumbly vegan brownies).

If you’re worried about the brownies being too sweet, use a dark chocolate with a higher cocoa percentage. The natural bitter flavors will help balance the sweetness from the sugar.

Vegan butter. In our testing, vegan brownies made with just oil turned out oily and bland in flavor. Brownies benefit greatly from a rich, buttery taste, and vegan butter works great. We have had great results with Earth Balance buttery sticks.

Substitute: Some folks have asked if they can use margarine. We haven’t tested this, but keep in mind:

(2) Vegan butter brands are usually formulated to mimic dairy in baking in a way that margarine isn’t. So if you have access to a product marketed as vegan butter, use that.

Dark chocolate. I like to buy a 65% to 75% dark chocolate bar and roughly chop it. The chocolate is melted with vegan butter to create a beautifully smooth chocolate sauce.

Tip: Don’t use semisweet chocolate, or the brownies will be too sweet.

Espresso powder. Espresso + chocolate are a dream team. It deepens and intensifies the chocolate flavor without making the brownies taste like coffee.

Substitute: If you don’t have instant espresso powder, you can substitute with instant coffee powder (use slightly more, about 1 1/4 to 1 1/2 teaspoons).

Sift the dry ingredients. Sift the flour and cocoa powder together in a medium bowl to prevent lumps.

Now you can fold the vanilla, salt, and espresso powder into the aquafaba mixture.

Melt the chocolate. Place a heatproof bowl on top of a saucepan filled with a few inches of water. Place the chopped chocolate and vegan butter in the bowl and heat the water until it’s at a rapid simmer. Stir until the chocolate has melted.

Or, melt the chocolate and butter in the microwave on high power in 30-second intervals, stirring after each round.

Fold the melted chocolate mixture into the aquafaba mixture until well combined.

Finish the batter. Gently stir the dry mixture into the wet ingredients until just combined and no dry flour remains. Fold in the chocolate chips.

Note: The batter will be quite thick, much more thick than a standard brownie batter.

Transfer the batter into your lined 8×8-inch (20×20 cm) baking pan and smooth out the surface with a spatula.

Bake. Bake the brownies for 34 to 37 minutes until a toothpick inserted in the middle comes out with some moist crumbs.

Tip: If it comes out with runny batter, the brownies aren’t done yet. If the toothpick comes out clean, the brownies have baked a bit too long. Tips on how to avoid this are in the FAQs section.

Let them cool before slicing (seriously though). Transfer the pan to a wire rack and cool for 30 minutes, or longer. Once they’re completely cool, slice and enjoy!

Tips for the best vegan brownies

Try to use the best quality chocolate you can find and afford: (1) for cocoa powder, Dutch process cocoa; (2) for the solid chocolate, use a chocolate you enjoy snacking on. 70% dark chocolate is a great place to start because it isn’t too bitter but will still produce decadent results.

I use a digital scale for all baking and highly recommend it for the most precise results (baking + precision are best friends).

Note: If you don’t have a digital scale, do not scoop the flour straight out of the bag or container. This always results in getting too much flour in your measuring cup, and too much flour = dry brownies.

Instead, use the spoon and level method. Spoon your flour out of the bag/jar into the measuring cup until almost full, then use a butter knife to level it off.

Overmixing the dry and wet ingredients aerates the batter, resulting in dry or cakey brownies. Instead, fold everything together until they’re JUST combined and you no longer see dry streaks of flour.

Home ovens can be all over the place when it comes to temperature, so if you have an oven thermometer, check that it’s accurate before baking.

Don’t slice the brownies too early.

They continue to cook after they come out of the oven, which is why it’s important to let them cool completely first. They’ll be a gooey mess if you slice into them too early.

Note: There are two ways to speed up the cooling process.

How can you tell when brownies are done baking?

The best way to tell is to stick a toothpick in the center of the batch. If it comes out with some moist crumbs, the brownies are done. If the batter is liquidy or runny, they need ~5 more minutes.

Is the toothpick completely clean? Unfortunately, that means they’ve been baked too long and will likely taste dry. Brownies continue to bake as they cool, so to avoid this, err on the side of underbaking and check the brownies 5 minutes before you think they’ll be done.

Can I make these vegan brownies gluten-free?

We tested these brownies with ¾ cup (82g) oat flour and ¾ cup (100g) all-purpose 1:1 gluten-free flour, and baked for 37 to 39 minutes with lovely results. The brownies have a bit less structure, but after they are refrigerated, the texture is great.

Many readers have also had success doing a straight 1:1 swap with King Arthur, Bob’s Red Mill, and Cup4Cup Ancient Grains gluten-free flour blends, but we haven’t tried this ourselves.

Can I make these brownies with less sugar?

Baking the brownies with less sugar makes us nervous because they might lose their wonderful texture.

Instead, try adding chocolate with a higher percentage of cacao to help balance the sweetness.

Or, scale down by just 25% of the sugar. You can read more about reducing sugar in baking from Food52 experts here.

How do you slice brownies without making a mess?


First, use a large knife (I use an 8-inch chef’s knife). Slice the brownies in one fell swoop instead of dragging the knife back and forth. The dragging method leads to more crumbs and uneven slices.

Also, you can try dipping your knife in hot water and drying it off with a kitchen towel before slicing. Repeat this process between every slice. I find that this method in conjunction with cooling the brownies on top of an ice cold sheet pan (see the Tips section) yields the cleanest slices.

How do you store vegan brownies?

First, try to slice only as many brownies as you need (or want). This is the best way to keep them as moist as possible. The leftover block of brownies can be stored in an airtight container for 3 to 4 days at room temperature of 8 to 10 days in the fridge.

If you don’t have a container big enough to fit the unsliced brownies, slice and and store the pieces in an airtight container.

Can I freeze these brownies?

Yes, they freeze very well. Keep the sliced brownies separated with pieces of parchment paper in an airtight container.

Freeze for up to 3 months. Let them defrost at room temperature when it’s time to eat.

Watch! How to make the best vegan brownies! 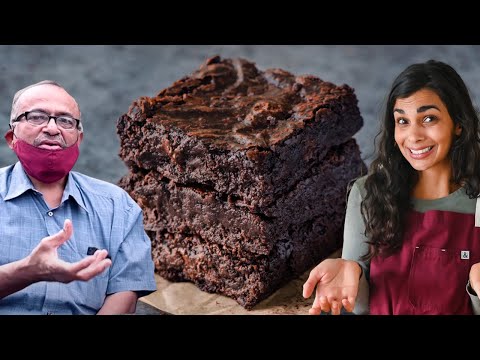 How to make amazing vegan BROWNIES at home

If you love these best-ever Vegan Brownies as much as we do, please be sure to leave a rating and review below :) And as always, I love seeing your remakes on Instagram!

* If your canned chickpeas have salt, use a bit less salt in the batter. Taste the batter before baking, add a pinch more as needed.  ** I included the measurements in grams for the Dutch process cocoa powder brand I used (Valhrona), but the exact weights vary slightly across brands. *** If you don’t have espresso powder, you can substitute with instant coffee powder (use slightly more, about 1 1/4 to 1 1/2 tsp). Here is the espresso powder I use (also available at Target, Whole Foods, and Walmart). Check out this blog post or this post for more options.  **** I highly recommend using parchment paper so you don’t have to grease the pan (the brownies already have sufficient butter).  ***** Don’t want to assemble a doubler boiler? Melt the butter and chocolate in the microwave on high powder in 30-second intervals, stirring after each round.  General tips for the best brownies Use the best chocolate you can find. A high quality dark chocolate bar and dutch process cocoa powder will make a big difference. Measure accurately. Use a digital scale and an oven thermometer for the best results. Speed up the cooling process, if you want. After resting the pan on a wire rack for 20 minutes, you can (a) carefully transfer the brownie pan to a large shallow pan filled with an inch or two of ice cold water; or (b) transfer the pan to the fridge for 20 to 30 minutes. For extra chewy (or fudgy) brownies: Cool the brownies for a few hours—the chewy texture sets up over time. These brownies are noticeably chewier on day 2. Refrigerating the brownies seems to make them more fudge-like.
Calories: 340kcal | Carbohydrates: 49g | Protein: 4g | Fat: 16g | Saturated Fat: 7g | Polyunsaturated Fat: 3g | Monounsaturated Fat: 6g | Trans Fat: 1g | Cholesterol: 0.5mg | Sodium: 218mg | Potassium: 222mg | Fiber: 3g | Sugar: 31g | Vitamin A: 6IU | Vitamin C: 0.04mg | Calcium: 39mg | Iron: 3mg