This Spicy Korean Cucumber Salad just might be my new favorite summer appetizer.

Smashed cucumbers are coated in a lightning fast yet incredibly delicious sweet-salty-spicy-tangy sauce and finished with scallions and toasted sesame seeds for freshness and crunch.

This salad is refreshing yet perfectly spicy and outrageously flavorful, making it a great choice for easy and breezy summer entertaining. Serve it as an appetizer or side dish when you have guests over, or keep reading to see how I turn it into an easy weeknight dinner.

PS: If you love cucumber salads but have a low spice tolerance, try my Smashed Cucumber Salad with Peaches instead.

The Korean word for spicy cucumber salad is oi muchim (오이무침), where oi means cucumber, and muchim means mixed with seasonings, or to mix or season. As popular Korean YouTuber Maangchi says, many Korean families have their own spin on this salad, so you’ll find quite a few variations.

In Korean cuisine, there are tons of little side dishes, primarily vegetable-based sides, that are served in small bowls as accompaniments for your main course. These are called banchan, and oi muchim is one such dish (kimchi is another popular one).

I first tried oi muchim at our neighborhood Korean restaurant in Brooklyn. It was the only restaurant within a 5-minute walking distance that had an incredible vegan option, so I found myself there quite often.

I typically ordered the vegan bibimbap, which came with a selection of banchan. The cucumber salad was always my favorite one, and since there were no vegan appetizer options, one day I asked if I could order a larger portion of the cucumber salad as my appetizer. The restaurant happily obliged, and that became my new go-to order for a couple years until I left Brooklyn.

Thanks to a few high-impact Korean pantry staples, this salad is an addictive blend of savory, salty, spicy, sweet, and tangy flavors, all wrapped in a perfectly crunchy cucumber package.

Traditionally, in a spicy cucumber salad, the cucumbers are sliced into rounds. In my various tests, this made for a good salad, but there were some issues.

When I sliced the cucumbers thinly (1/8 to 1/4″), after the first 10ish minutes, the cukes lost some of their crunch (the most appealing part of cucumbers!). When I sliced them thicker (1/2″), they stayed crunchy but their large uniform surface area meant they didn’t absorb the flavor of the dressing as well.

So I opted for smashing cucumbers, which is more common in Chinese cucumber salads.

Smashing cucumbers creates all these nooks and crannies, creating more ridged opportunities for the dressing to seep into the cucumbers. At the same time, the cukes stay crunchy because they have more heft than thinly sliced cucumbers.

All that said, if smashing cucumbers is difficult for you (it might be hard for those with arthritis), you can slice the cukes into 1/4″ (.6 cm) rounds (but try to serve all the salad immediately for the best texture).

Remove as much water from the cucumbers as possible.

Cucumbers are 96% water, so to (1) avoid a watery salad and (2) ensure the cucumbers absorb maximal flavor from the dressing, I rely on a few techniques.

1) Salt the smashed cucumbers and allow to rest for 30 minutes (or longer). Through the power of osmosis, the salt draws out water from the cucumbers but also seasons them.

2) Weight the salted cucumbers down with a bag of ice while they’re resting. This helps push down on the cucumbers, causing them to release even more water.

3) Squeeze the cucumbers of excess water (or use a salad spinner) before tossing with the dressing. This final step wrings out even more water.

Note: If you’re going to serve all the salad immediately, you can skip steps 2 and 3. If you think you’ll have leftovers, I recommend all three steps for the optimal texture and maximal crunch.

With these techniques, the cukes stay crunchy like a raw cucumber, but taste almost like pickled or marinated cucumbers, which is the best of both worlds.

Pack maximal flavor into the dressing.

All the Korean cucumber salad recipes I came across use gochugaru (Korean red chile flakes) but most did not use gochujang (a fermented Korean red chile paste). I have to say that using gochujang in the dressing makes a huge difference and takes this salad from good to incredible.

Adding gochujang to the dressing supercharges it with the best flavors: a deep savoriness, serious heat, a sweet saltiness, and just a touch of tang. It also has a thick, sticky, viscous texture, which adds body to the dressing and fully coats the cucumbers.

I’ve tried this recipe with Persian, Japanese, Korean, and English cucumbers and all work great. Many Korean blogs mention you can also use Kirby/pickling cucumbers, but I haven’t tried it myself.

I don’t recommend using a standard pole cucumber, as they’re less sweet and have lots of seeds.

A staple in Korean cooking, this is a fermented red chile paste made from gochugaru, fermented soy beans, glutinous rice, and salt. It’s spicy, sweet, umami-rich, and an absolutely amazing ingredient.

Substitutes: You could try starting with half the amount of miso paste and adjust to your taste, but it won’t have the same flavor. Gochujang is the star ingredient in this salad so I would advise seeking it out.

These are Korean red chile flakes, but they’re quite mild, much milder than red pepper flakes. They have a subtle sweet fruitiness but also slight smokiness. I use them in all kinds of recipes, not just Korean dishes, when I want a mild chile heat.

If you can spring for just one of these two specialty Korean ingredients, I’d go with gochujang because it adds so much flavor and heat to this salad all at once.

Slice the cucumbers in half, vertically. Press the flat side of a heavy knife against the cucumber and press down with the heel of your palm, as if you were smashing down on a garlic clove to release its skin. You should feel the cucumber smashing beneath your knife. Once smashed, tear the cukes into bite-sized chunks (or slice them into pieces with a knife).

Note: If using a larger cucumber, like an English cucumber, you’ll want to first chop the cucumber into 2 to 3-inch segments, then smash.

Add the smashed, torn cucumbers to a colander and add the salt. Toss with your hands to distribute evenly. Weigh the cucumbers down with a large bag of ice (or a large bag of frozen vegetables). Refrigerate for 30 minutes (or up to 4 hours).

Assemble the salad. Add the smashed cucumbers to a large bowl, and mix in the sliced shallots and scallion whites/light greens. Pour the dressing on top.

Use your hands to massage the dressing into the cucumbers for about a minute. Garnish the salad with toasted sesame seeds and scallion greens.

Where can I buy gochujang? And gochugaru?

How should I serve this spicy cucumber salad?

A Korean cucumber salad is traditionally served as an appetizer or side dish alongside the main course, and that’s how I serve it if I have a few people coming over.

If it’s just me and/or Max eating it, I’ll turn it into a main course by serving it alongside cooked brown/white rice or noodles and some sort of baked/fried tofu (store-bought tofu if I don’t have time to cook tofu). If I don’t have any tofu on hand, I’ll use edamame for a speedy, no-cook option.

This salad would also make a fabulous side dish or starter for these Crispy Sesame Tofu Lettuce Wraps or these 15-Minute Chili Garlic Noodles.

Can I make this salad less spicy?

If you want some heat but not as much, use 1 tablespoon of gochujang instead of 2. Gochugaru is quite mild so it doesn’t add too much heat, but you can skip that if you’d like.

Can I make this recipe ahead of time? How long do leftovers last?

You will get the best results if you make this salad within a few hours of serving. That said, if you do need to make the salad ahead of time, the flavor is still great.

The salad still stays crunchy for 2 to 3 days in the fridge, but keep in mind, the cucumbers will continue to release water. Don’t worry though—the resulting “sauce” is delicious and flavorful, and I like to drizzle it over rice or noodles. If you have extra scallions, I’d slice a fresh scallion or two for more freshness.

You can also smash the cucumbers and make the dressing ahead of time, store separately in the fridge, and then assemble before serving. 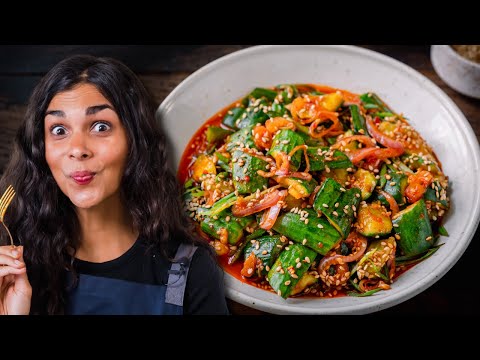 If you love this Spicy Korean Cucumber Salad, please rate and review the recipe below with your feedback :) Thank you, as always!

*I don’t recommend using a pole cucumber, as they’re less sweet and have a lot of seeds. Persian cucumbers, which are small, are the easiest to smash.  ** You can buy pre-roasted sesame seeds, or toast raw sesame seeds yourself. To toast them, heat a skillet over medium heat. Once the pan is hot, add the sesame seeds and toast, stirring from time to time to prevent burning, until golden brown, 2 to 4 minutes.  *** For moderate heat, use 1 tablespoon of gochujang.  *** Toasted sesame oil imparts a rich, nutty flavor. I have tried many brands, and Ottogi is my favorite toasted sesame oil (affiliate link).  **** If you are serving all of the cucumber salad at once, you can skip the step of wringing out the smashed cucumbers.  General Notes This salad is best served chilled. It should be pretty chilled from the cucumbers resting in the fridge. If keeping leftovers, the cucumbers will release more water over time. Don’t be alarmed—it doesn’t water down the flavor, and the resulting sauce is delicious. Pour the sauce over cooked rice for an easy flavor boost.
Calories: 123kcal | Carbohydrates: 16g | Protein: 3g | Fat: 7g | Saturated Fat: 1g | Polyunsaturated Fat: 3g | Monounsaturated Fat: 3g | Sodium: 857mg | Potassium: 365mg | Fiber: 2g | Sugar: 8g | Vitamin A: 551IU | Vitamin C: 9mg | Calcium: 64mg | Iron: 1mg