Whenever I ask y’all which Indian recipes you’d like to see, Baingan Bharta is always high on the list. So I’m excited to finally share my version. It’s silky and jammy in texture, boasts a tantalizing smoky aroma, and is brimming with warm, pungent Indian spices.

It requires relatively few ingredient and is naturally vegan, gluten-free, nut-free, and soy-free, so it’s allergen-friendly. Serve it as a main course with some homemade vegan naan and gobi manchurian or serve it as as a side dish with some dal tadka or vegan palak paneer!

PS: If you or your family members are eggplant skeptics, rest assured this is the one eggplant dish that even eggplant haters will enjoy. My partner Max has a blanket “I hate eggplant” policy, but I was able to sneak this one on him because it doesn’t look like eggplant. And he not only enjoyed it, but asked for seconds.

Table of Contents
1. What is Baingan Bharta?
2. Why this recipe works
3. Ingredient notes
4. Step-by-step instructions
5. Expert tips
6. Frequently Asked Questions
7. What to serve with this recipe
8. Recipe Card

What is Baingan Bharta?

Baingan Bharta is an eggplant dish originating in the Punjab region of India, though there are many regional variations (as with almost every dish in a country as diverse as India). It’s smoky, spicy, and tangy, and so flavorful!

First, for the baingan: You roast a whole eggplant over an open flame until the skin blackens and chars, which infuses the entire eggplant with a smoky aroma and taste. In Punjab, the eggplant is often roasted in the tandoor oven, which infuses it with that smoky charcoal aroma.

For the bharta: You’ll sauté aromatics like onions, ginger, garlic, and green chiles in a bit of oil, along with a few spices like coriander and red chile powder; then you’ll add some tomatoes for that tangy flavor and cook until soft. Finally, add the eggplant mash into the bharta and cook everything together to blend the flavors.

Fun fact: eggplant, AKA aubergine, originated in India and is believed to have been around for thousands of years!

At its core, this is is a pretty simple dish featuring minimal ingredients.

The one “secret” to the most flavorful baingan bharta is to smoke the whole eggplant over an open flame until charred and almost falling apart. This infuses every bite of eggplant with the smoky aroma and taste that is a hallmark of this dish.

The best method, no surprise, is the “authentic” method: smoking a whole eggplant over an open flame (on your gas stove). It adds that bold smoky aroma and makes the eggplant flesh silky and unctuous.

However, for those who don’t have a gas stove or don’t feel comfortable with this technique, method 5—sautéing chopped eggplant in oil and salt in a frying pan—also worked quite well, producing soft, jammy eggplant that was easy to mash and had nice eggplant flavor.

Of course, sautéing eggplant doesn’t give you that classic smoky flavor, but as you’ll see below, you can infuse smoky flavor into it with another quick method.

The most important ingredient and the star of baingan bharta is eggplant. If you are smoking it over an open flame, here are a few tips when buying an eggplant.

The below photos/instructions are for roasting the eggplant directly over a stove flame (the traditional method of making baingan bharta). If you’re not comfortable with this method or don’t have a gas stove, use the sauté method, which is outlined in the recipe card notes below.

Brush the eggplant with a light coating of oil and peel off/trim as much of the stem on top as you can (to avoid burning). Heat a gas burner over medium-low heat.

Flip the eggplant upside down and char the top for about 3 minutes. If the stem starts to burn, take it off the heat and try to trim more of it off.

Flip the eggplant on its side and position the thicker bottom half directly over the flame. Cook, rotating every 2 minutes, for 15 to 20 minutes, or until a knife can easily pierce the fattest part with no resistance.

Move the thinner top half of the eggplant directly over the flame. Cook, rotating every 2 minutes, for a total of 6 minutes.

The eggplant should be deeply charred all over, wrinkly, and almost falling apart, like the photo on the right.

Use tongs to transfer the eggplant to a bowl, and cover with a plate to steam for 5 minutes (this is essential for making the eggplant easier to peel).

Use your hands to peel off the skin (you may want to dip your hands in a bit of water to make it easier to peel). Remove the big ashy black bits (tiny bits are fine).

The instructions for making the bharta (the filling or the mash) are the same whether you roast the eggplant over the stove flame or cook it on the skillet.

Heat the oil in a frying pan over medium-high heat. Fry the cumin seeds for a minute. Add the onions with a pinch of salt and cook for 4 to 5 minutes.

Cook until onions are softened but not browned. Add the garlic, ginger, serrano peppers, and turmeric, and cook for 60 to 90 seconds.

Once very aromatic, add the tomatoes, salt, and coriander.

Cook until the tomatoes are soft, well incorporated, and start to release oil, about 5 minutes.

Add in the mashed eggplant mixture and kashmiri chili powder and toss well to combine.

Reduce the heat and cook for 3 to 5 minutes, stirring the eggplant into the bharta and mashing together. Add in the garam masala and chopped cilantro and season with salt.

Expert tips for this recipe

The eggplant needs to be very soft.

When smoking the eggplant over an open flame, wait until the eggplant is very soft. You might think it’s done because the skin is charred, but you need to test the fattest part of the eggplant with a paring knife. If there’s some resistance, it’s not ready. If there’s no resistance, like in the video below, it’s good to go.

Worried that the eggplant is charring too much on the outside but not cooking on the inside? Just lower the heat a touch. 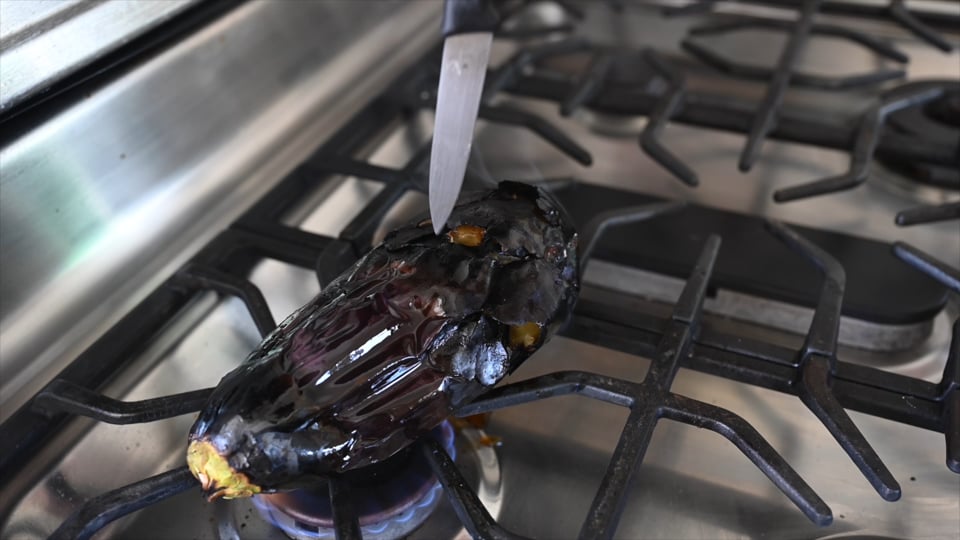 How to test eggplant for doneness

Your stove will get messy.

There’s no real way to avoid your stove getting messy when you smoke the eggplant directly over the flame. Some folks say you can line your stove with foil, but I think that’s a fire hazard. Instead, just use a grease-cutting soap and a tough sponge to clean up your stove later. A cleaning solution like Bar Keepers Friend, a baking soda paste, and/or a 1:1 mixture of distilled white vinegar and water will go a long way.

If you don’t want to deal with that, use the stovetop method to cook the eggplant. It’s not the “authentic” way but it’s still delicious, especially if you can add some smokiness through the Dunghar Method (more on that in the first FAQ below).

Once the smoked eggplant is done, transfer it to a bowl and cover it with a plate to steam for 5 minutes. The steam will make it much easier to peel off the skin. It still requires a few minutes and some patience, but it’ll be much harder if you don’t steam it.

Both versions are very delicious.

If you don’t have a gas stove or are nervous about cooking the eggplant on an open flame, don’t worry. The stovetop eggplant version is still very good. You won’t get the same smoky flavor, but it’s still a great dish. Plus, you can add some of that smoky flavor in using another method that takes just a couple minutes (read the first FAQ for more info!).

How do I sauté the eggplant instead of smoking it?

2. Heat 2 1/2 tablespoons of neutral-flavored oil in a large nonstick frying pan over medium-high heat. Once the oil is hot and shimmering, add the eggplant and season with ½ teaspoon kosher salt. Cook, tossing occasionally, for about 6 minutes, until the eggplant starts to break down. Reduce the heat to medium and continue cooking until the eggplant is soft and jam-like and there’s no resistance when pierced with a fork, about 20 minutes.

3. Mash the eggplant as described in the instructions above.

If I sauté the eggplant, how can I get the traditional smoky flavor of baingan bharta?

You can use the traditional Indian method of coal-smoking food called the Dhungar Method. It does not produce the exact same smoky flavor as charring the eggplant over an open flame, but it does add a nice smokiness that is not overpowering.

All you need is a piece of lump charcoal, a small bowl, and a tiny bit of oil (you can get charcoal at any hardware store and many grocery stores).

When the dish is done, light a 1 to 2-inch piece of lump charcoal over a gas flame until smoking and red hot. Place a small stainless steel or glass bowl in the middle of the dish. Add the hot charcoal to the bowl, pour ½ teaspoon oil on the charcoal, and cover with a lid as soon as it starts smoking. Cover for 2 to 3 minutes to infuse the smoke.

Tip: If you want to see a video of how I use the Dhungar method in another recipe, check out my Dal Makhani video on YouTube at the 5:34 mark.


Can I grill the eggplant instead to achieve the smoky flavor?

As I mentioned earlier, I grilled whole eggplant on an indoor grill pan, but it didn’t yield any smoky flavor. But, if you have an outdoor charcoal grill, it would be a good option, though it can be time consuming.

To grill eggplant, grease your grill grates well and and preheat the grill over medium-high. Once the grill is smoking, add the whole eggplant. Turn occasionally, until the skins are completely charred and the insides are soft (it took 40 to 50 minutes on a grill pan).

Can I use liquid smoke to achieve the smoky flavor?

No! Liquid smoke is best-suited for American-style dishes like BBQ or vegan “bacon” and does not vibe well with Indian flavors.

Can I make this dish ahead of time? Can you freeze baingan bharta?

Yes! You can prepare the eggplant 5 days in advance; just store it in an airtight container in the fridge. You can also make the bharta several days in advance and store it separately.

Leftover baingan bharta will stay good in the fridge for 5 to 6 days; you can also freeze it for a few months with good results.

To reheat, microwave or add to a frying pan on medium-low heat until warmed through.

What to serve with baingan bharta

As mentioned, my boyfriend Max detest eggplant. But as you can see in this video, even he loves this recipe. 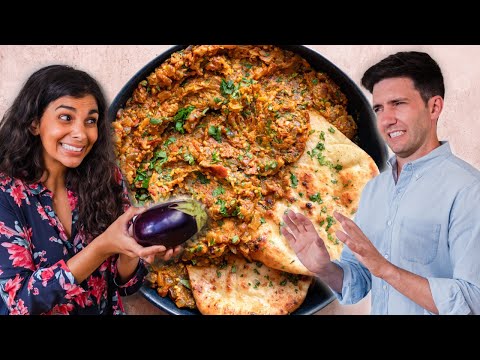 The only eggplant dish my boyfriend will eat

If you enjoy this Baingan Bharta recipe as much as he does, please be sure to rate and review the recipe below :)

Baingan bharta is THE eggplant dish that will make you fall in love with eggplant! It's a smoky eggplant mash mixed with a flavorful blend of garlic, ginger, spices, and tomatoes. Choose from the traditional method for the best results—smoking whole eggplants on an open flame—or the sauté method for something a little easier.
Prep Time: 10 mins
Cook Time: 30 mins
Total Time: 40 mins
Course: Dinner, Side Dish
Cuisine: Indian
Diet Gluten Free, Vegan, Vegetarian
Serving size: 2 as a main (4 as a side)